WARNING: MAJOR spoilers ahead for “Venom: Let There Be Carnage”

As is usually the case with blockbusters at this point, “Venom: Let There Be Carnage” has some bonus content for us during the credits, in the typical blockbuster style. And after years of speculation about whether Sony’s big screen version of Venom would ever show up in the MCU alongside his comic book nemesis Spider-Man: yep!

Before we get into all the whos and hows and whys, a quick rundown of the mid-credits scene. After defeating Cletus Kasady (Woody Harrelson) and Carnage, Eddie Brock (Tom Hardy) and Venom are taking a load off with a beach vacation.

As Eddie and Venom lounge about watching TV in their room, the symbiote offers to show his host some of the incredible knowledge he’s picked up over the years. He sells it in a pretty epic why, talking about how symbiotes have experienced stuff that humans couldn’t even imagine. But, of course, things pretty much immediately go haywire. Suddenly, the room is much cleaner, it’s now light out, and everything is just a little different. This is not not what Venom intended to happen — he’s just as confused as Eddie in the moment.

As the two take in their new-ish surroundings, we hear a familiar voice coming from the television. Sure enough, J.K. Simmons’ J. Jonah Jameson is back on screen, ranting and raving about Spider-Man — Tom Holland’s Spider-Man.

The image of Peter Parker on screen immediately catches Venom’s attention, the symbiote licking the screen out of apparent hunger and ominously saying “This guy.” And that’s where “Venom” leaves us.

So what does the ‘Venom 2’ mid-credits scene mean for ‘Spider-Man: No Way Home’?

Well, realistically, there’s no way to know for sure. But it definitely looks like Venom and Tom Hardy have been teed up for an appearance in “Spider-Man: No Way Home.” Presumably, that weird moment where everything changed was the moment Doctor Strange unleashed the spell that was teased in the “No Way Home” trailer, but we won’t be able to know that with absolute certainty until we actually get to watch that movie.

It’s not likely that Venom will be a major character in “No Way Home.” Odds are instead that he’ll be among the parade of cameos we’re expecting from Sony’s previous “Spider-Man” movies, like Alfred Molina’s Doc Ock. All of that will probably be a sideshow of sorts, with the true villain being somebody new. So expect like 10 or 15 hilarious minutes with Venom. 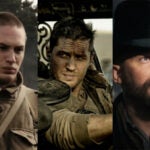 Also Read:
The Evolution of Tom Hardy: From ‘Band of Brothers’ to ‘Venom’ (Photos)

It also feels like this scene could be a hint for what’s causing the multiverse madness in “No Way Home.” We suspect that, despite what it looks like in the trailer, Doctor Strange is not actually responsible for all that craziness, and here we have a multiverse shift in a similar way — as Venom is promising that’s going to show Eddie something he could never imagine.

But Venom is clearly surprised by the change, and even yells that he didn’t do it. The same thing could be happening in “No Way Home,” with the shift just coincidentally happening at the moment Doctor Strange was doing whatever he was actually doing. It’s our best guess, anyway.

Is Venom an MCU character now?

While clearly a crossover is imminent, we’re not sure that Venom is about to get full integration into the MCU. It wasn’t that long ago that Sony pulled Spider-Man from the MCU for a month, so I’d be surprised if they’re ready to hand over the rest of its Marvel properties just yet.

But the introduction of the multiverse changes the dynamic of the situation pretty significantly. Sony can now just pull Venom in for “Spider-Man” movies — since it, not Disney, distributes those — without having “Venom” movies exist in the same continuity with all that Avengers stuff. Or they could have Tom Holland’s Spidey show up in a “Venom” movie. Or whatever they want, because there are no rules in the multiverse.

Either way, it’s probably for the best that Venom not spend a ton of time in the MCU, because he doesn’t really have the right vibe for it. Really, though, he’s weird even by Marvel standards, and just not in step with what the MCU is like. A Venom that is built specifically for the MCU could work, but this Venom was most definitely not.