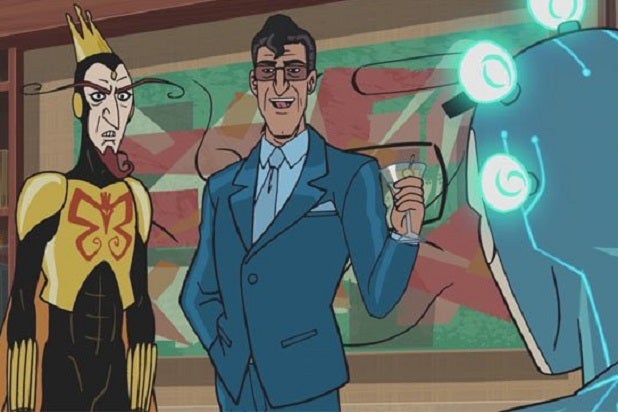 (Note: This post contains spoilers from the Sept. 16 episode of “The Venture Bros.”)

After several episodes of “The Venture Bros.” in a row teasing at the larger plot line of Season 7, the show’s latest entry seems like a one-off episode that doesn’t contribute much to the thread. But the episode includes a few key elements that may well totally change things as the season continues.

In the seventh episode of Season 7, “The Unicorn in Captivity,” we spend a lot of time with the Monarch (Christopher McCulloch) as he becomes the last-minute addition to a heist, organized by villains in the Guild of Calamitous Intent. Though the job is to steal a potentially world-changing teleporter invented by Doc “Rusty” Venture (James Urbaniak), the Monarch isn’t super-thrilled about situation — especially because his only job is to use his butterfly wings to fly around and play lookout. While the story gains its own intrigue, it’s not immediately clear where it’s all going from an overall view of the season.

That might be because “The Unicorn in Captivity” is setting a foundation for future events, and if we consider what’s happened earlier in Season 7, it’s possible to guess at what that foundation might be. First, the Monarch’s heist is being run by a villain with whom the Monarch has a bit of history: Copycat (Toby Huss), a Dean Martin-esque supervillain who is capable of making duplicates of himself who are able to carry out tasks.

As the episode goes on, Henchman 21 (Doc Hammer) discovers that Copycat is actually planning to double-cross his team. The villain is using his various doubles as a second team to steal the teleporter from the first group of thieves, leaving them to get caught by the Office of Secret Intelligence and the frighteningly formidable Brock Samson (Patrick Warburton).

Copycat’s plan might just be regular bad guy stuff, but there are a lot of details here that suggest it’s more than that. First, Copycat’s original, villain-laden heist was seemingly sanctioned by the Guild, since it was Dr. Mrs. The Monarch (Hammer) who suggested the Monarch take part in it. Unless she was setting up her own husband, she expected the job to be relatively easy and to go by the numbers.

It’s possible the Guild Councilwoman didn’t really have the details of what was going to happen, seeing as she likely would have kept the Monarch from doing something that could be considered arching his old nemesis, Rusty. Still, the heist seemingly had the Guild stamp of approval, and the Guild isn’t in the business of getting its own members killed or captured.

Next, we have Copycat’s past behavior. Back in Season 6, Copycat went out of his way to mess with the Monarch during a party at the home of supervillain and crime boss Wide Wale (Hal Lublin). When the Monarch showed up in his supervillain costume, threatening to out Wide Wale to his legitimate business associates, Copycat offered to loan the Monarch a suit from his apartment in the same building. But rather than help, Copycat took the opportunity to knock the Monarch out, impersonate him peeing in Rusty’s pool, and get him in trouble with Dr. Mrs. The Monarch.

That would make sense if we consider the major plot line that’s been running through Season 7, concerning the Peril Partnership, or PP. That’s a Canadian villainy group and a rival of the Guild, and throughout Season 7, we’ve been seeing evidence that the PP has infiltrated the Guild, seemingly in order to undermine or destroy it in its currently weakened, rebuilding state.

Following that logic and what we’ve seen in the past, it becomes a fair bet that Copycat is a member of the Peril Partnership. The plan with the heist double-cross, then, was to further damage  the Guild by getting its members caught or killed, exposing it to the OSI, and hurting Dr. Mrs. The Monarch — while also allowing the PP to escape with the teleporter, a device the OSI thinks is going to upset the status quo of the entire world.

The wild card, as always, is the Monarch. Thanks to 21’s intervention, the Monarch managed to avoid getting caught in the heist and to abscond with the teleporter, while Copycat was seemingly killed in a helicopter crash (though the likelihood that he’s actually dead feels extremely low right now).

That teleporter seems like a big factor in the future of the Guild and the PP, and also is likely to loom large in the futures of both the Monarch and Rusty. The Monarch has been trying to claw his way back up in the ranks of the Guild so he can get back to arching Rusty, and something as amazing as a working teleporter could give him some serious advantages. Meanwhile, Rusty just lost what might be the only thing he’s ever accomplished, other than his wrecked cloning research — a truly world-changing accomplishment. Both are likely to have big plans for the invention and a lot of conflict surrounding it.

“The Venture Bros.” loves to throw wrenches into stories and change up what fans expect to play out, so we’ll see what ultimately happens. But if the PP is planning to go after the Guild, it seems likely to happen soon — even though Copycat’s heist failed, it still seemed a major embarrassment for the Guild, and possibly a violation of the recently re-signed Treaty of Tolerance between it and the OSI.

Who knows exactly it will all play out, but it does feel like “The Venture Bros.” just moved a whole bunch of its chess pieces into place for the rest of the season.