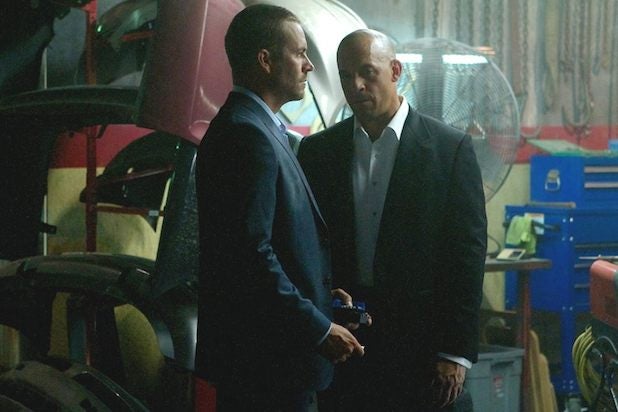 Vin Diesel used his massive social media presence to share the first image of he and Paul Walker together in “Fast and Furious 7.”

Diesel, who plays Dominic Toretto in the popular Universal franchise, posted the picture (above) on Facebook on Tuesday, as well as another (below) of just himself. The stills are, apparently, from the first trailer for the April 3 release.

“Universal came to visit, to show the trailer for FF7…Speechless… yeah, it was that INCREDIBLE!” Diesel told his 85.3 million followers. “I must also say, that it was emotional and bittersweet… we all went above and beyond to make Pablo proud, but man, I wish he could see what we have created and just how far we have come.”

The seventh installment in the action franchise is Walker’s last film. The actor, who plays cop-turned-fugitive Brian O’Connor, was killed in a car accident last November during a break from production.

While the studio and producers were initially unsure of how to proceed with the rest of the film, director James Wan ultimately utilized Walker’s brothers, Caleb and Cody, as stand ins to complete scenes and action sequences.