Virtual reality — with a few notable exceptions — is still a work in progress.

That’s what I was left thinking after leaving the Oculus LA holiday party on Tuesday night. The event itself was well done: set up at the trendy Mack Sennett Studios in Silver Lake, California, with plenty of open space and experiences to try out, a DJ spinning, and even an open bar (journalistic integrity kept me from indulging, of course).

But after checking out several of the experiences on hand, you couldn’t help but think there are still a few steps to take before VR reaches mass adoption. Confusing storylines, clunky interactions, and a sense that many of the experiences would be better as video games or short films often overrides the aesthetically breathtaking scenes playing out in front of you. Not to mention, wearing a headset is still a hurdle, compared to simply pulling out your iPhone and using an augmented reality app.

Also Read: Blac Chyna Sued for Posting a Photo of Herself on Instagram

For example, take the new “Blade Runner 2049” experience. I knew it was a red flag when I put on my headset and saw the last person had given up midway through, but I pressed forward. I started off in a flying car traveling through future-LA, receiving directions from a blonde-haired woman on a screen to my right. What was she saying? I’m not exactly sure, since the DJ was blasting Daft Punk in the background, but it seemed like an important mission. I was able to play with some of the gadgets in the car, but they didn’t seem to impact anything happening on screen.

Next thing I knew, I was facing a man that looked vaguely like a brown-haired Louis C.K. in an underground cellar. And then I shot him … because he was a replicant or something? I’m not sure why I shot him — it wasn’t my call. The blonde-haired woman appeared again on screen and gave me more directions. She then showed me a replay of the brown-haired Louis C.K. being beaten up. I guess he wasn’t dead? (Sorry, I didn’t see the movie, either.) 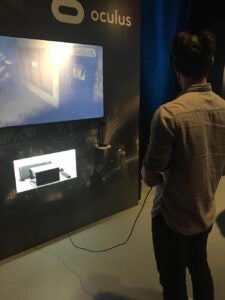 After being told to look to a wall on my right and press the controller in my hand, a few nifty infrared documents flashed in front of me. If this sounds vexing, that’s because it was. Rather than wait to see if I’d actually do much else, other than passively going through the experience, I tapped out and took off my headset, too.

Undeterred, I also checked out an NBA three-point shootout experience. In the past, competitive or multi-player experiences have always seemed like the best bet for VR (think a next-level Nintendo Wii). But following body movements is still consistently inconsistent for VR. In my first round, I made an embarrassingly low three shots in 30 seconds, using my normal jump shot.

Looking to redeem myself,  in case anyone had watched my pathetic performance, I quickly went for round two. My score was much better, hitting 10 bombs and feeling briefly like Steph Curry. But it was fleeting, since I knew I was using a form that was in no way close to how someone would shoot in a real game — with my arms firing the shot the moment the virtual ball hit my virtual fingertips. Down the line, going head to head with a friend in an experience like this would be fun, but there’s still a disconnect between movements in reality and VR.

The rock climbing experience right next to me didn’t seem like a better bet, either. One attendee took off her headset and told TheWrap “I feel dizzy” — the dreaded line the industry has been fighting to remedy.

Still, this isn’t to say the event was completely in vain. Many of the experiences were eye-catching, including a Marvel “Powers United” vehicle and a journey through the “land of the dead” with Disney Pixar’s “Coco” companion piece. And Facebook’s “Spaces,” allowing friends to hangout in VR from across the globe, looks promising. But as another attendee put it, the experiences ultimately left the viewer feeling “really impressed by the technology, but not all that engaged with the actual experiences.”

VR has hit a purgatory stage, where the novelty is wearing off, but the technology isn’t full formed. These are hiccups you’d expect from an emerging industry. I look forward to checking out more next year, and hopefully not feeling compelled to take off my headset and re-enter “normal” reality.