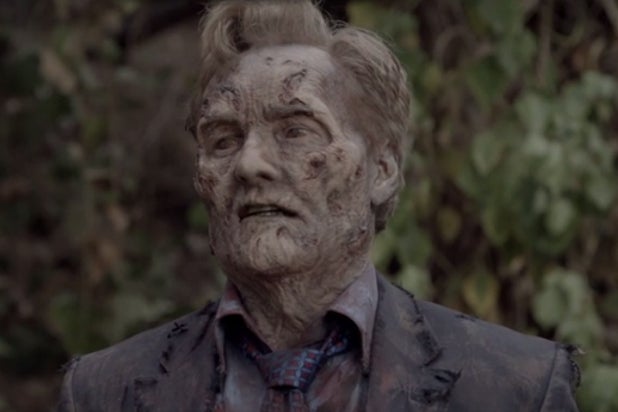 Conan O’Brien hosted the entire “Walking Dead” cast on his TBS show Thursday, where he got in the mood with an elaborate, zombified cold open.

The bit followed an undead O’Brien creeping up on his sidekick Andy Richter, who was innocently listening to music in a crummy shack in the middle of the woods, as one does. The makeup jokes that followed practically wrote themselves, but are still worth a watch via the embedded video below.

Then, for the first time ever, the “Walking Dead” cast sat together in a joint late-night interview on the TBS set, where Norman Reedus, Lauren Cohan, Danai Gurira, Steven Yeun, and Melissa McBride discussed what they would do during a real-life zombie apocalypse.

Some would break out the swords, others would wait idly by for a slow, painful, merciful death.

The debate devolved into an argument between host and sidekick when Richter offered his own half-brained survival theory.

Watch the cold open below, and group interview beneath that: