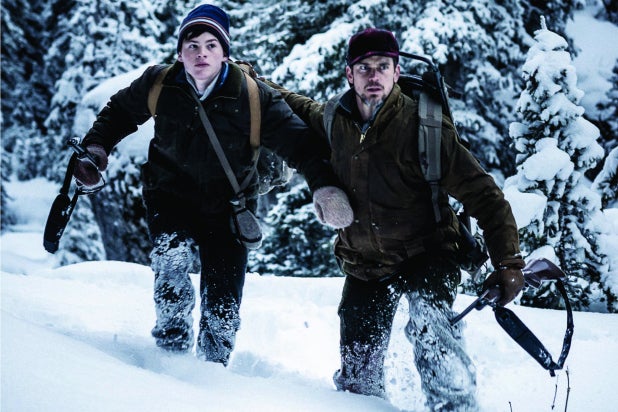 “Walking Out” is a tense survival thriller that offers much more than nail-biting adventure. Sure, it has plenty of edge-of-the seat suspense, but, as written and directed by Alex and Andrew Smith (“The Slaughter Rule”), it is just as noteworthy for its terrific, spare dialogue, stunning cinematography, stirring musical score and poignant narrative arc.

Based on a short story by David Quammen, it’s a tale of a father and son who must battle the elements in the Montana mountains, but it’s also a relatable rumination on the complexity of parent-child relationships and their continuing sway over us into adulthood. Cal (Matt Bomer) is 44, divorced and living alone in Montana. He invites his 14-year-old son David (Josh Wiggins, “Max”), who resides in Texas with his mom, for a winter hunting trip. Cal’s plan is for the pair to backpack into the mountainous wilderness and track and shoot a moose.

David seems more interested in playing video games on his phone than in exploring the great outdoors. But, while he doesn’t articulate it, it’s clear he also yearns to be closer to his dad. For his part, Cal wants to be known and understood by his estranged son. When Cal asks David if he’s sure he wants to go on this moose hunting expedition, David answers honestly that he isn’t sure, but he wants to. And so they take off into the unknown.

Cal had gone hunting with his late father Clyde (Bill Pullman) when he was David’s age. At first it seems as if Cal wants to recreate, and perhaps relive, happy memories. Later, we learn matters are far more complicated, but Cal, nonetheless, seems intent on bonding with his teenage son through nature and responsible hunting (killing only what they plan to eat).

He gives David the rifle his dad gave him on his 14th birthday. Clearly, this has great significance to Cal; David accepts it more dutifully than happily. When his dad tells him about the moose he’s seen and their regal bearing, David asks “Why kill moose if they’re so royal?”

Cal begins to tell his son about his own boyhood hunting excursions with his dad: “I was you once.”

Wiggins is terrific as David, perfectly embodying a typically terse teenage boy with subtle authenticity. He communicates volumes with low-key facial expressions and awkward gestures. We feel we know this boy.

Unfortunately, Cal is not as fully fleshed-out. While Bomer gives the role his all and is excellent playing against type, we don’t learn enough about his character to fully understand his motivations and state of mind. We get that his own relationship with his father was fraught, and that he mourns both his loss and that of his mother, who died when he was a teenager.

But we don’t know much more about Cal as an adult. Why does he live off the grid? What does he do for a living? Does he have a partner? Friends? Why is he estranged from his son? What caused his break-up with David’s mother? Individually, these questions are not essential, but taken together they amount to missing backstory.

Even with those holes in character development, the story of Cal and David’s increasingly terrifying trek is absorbing and powerful. Their present dilemma is compelling enough to make us almost forget about contextual questions.

It is a testament to Bomer and Wiggins’s impressive acting and their chemistry that we believe them as father and son, and are riveted by every turn in their journey. Their expedition begins awkwardly. Initially, their relationship is distant and strained: Cal seems hard on his son. Then, his loving side prevails.

The pair begins to grow closer, but all too soon they face serious peril upon encountering a mother grizzly and a dead cub. A few unwise moves and an accidentally discharged rifle turns their adventure into a life-and-death struggle. David is faced with huge decisions that affect their very survival. Their saga unfolds dramatically, with some very tender moments interwoven.

While the three main characters are grandfather, father and son, a fourth character is the mountainous landscape outside Bozeman, Montana. Working from Montana-based author Quammen’s tale, writer-director brothers Alex and Andrew Smith were raised in Montana and clearly wanted to pay homage to their home state, capturing its dramatic beauty.

Lily Gladstone (who’s been winning awards for her supporting turn in “Certain Women,” which premiered at Sundance 2016) has a small, but key, role as a local who meets the two at a critical moment in their excursion. She’s that rare actress who’s memorable in the smallest part, inhabiting the role convincingly.

But this compelling film belongs to Wiggins and Bomer, and to the astonishingly gorgeous backdrop of the Montana mountains. It’s a brutal, blood-drenched story, but also a captivating and poignant generational saga that will stay with the viewer long afterward.