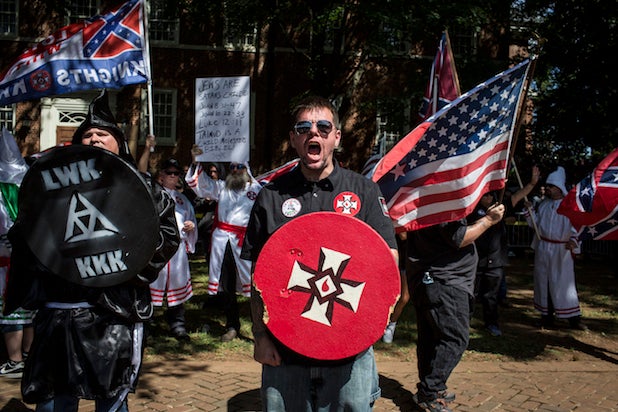 CHARLOTTESVILLE, VA - JULY 08: The Ku Klux Klan protests on July 8, 2017 in Charlottesville, Virginia. The KKK is protesting the planned removal of a statue of General Robert E. Lee, and calling for the protection of Southern Confederate monuments. (Photo by Chet Strange/Getty Images)

Remember that “Chappelle’s Show” sketch about the KKK leader who didn’t realize he was African-American? It turns out real-life white supremacists also tend to discount evidence that they aren’t all white.

When confronted with genetic ancestry tests that might reveal Jewish or African roots, white supremacists try to discredit the “bad news,” according to a new study  by UCLA sociology professors Aaron Panofsky and Joan Donovan.

“They don’t say after the test results, ‘I was a racist jerk and now I’m enlightened,'” Panofsky told TheWrap. “No one ever said, ‘I’m 5 percent African, and the scales have fallen from my eyes, and I’m not a white nationalist.'”

Instead, “the overwhelming amount of talk and discussion about these tests is what we call ‘identity repair talk,’ which tries to dismiss or reinterpret the bad news,”  Panofsky added.

The study focused on the racist group Storm Front, whose members reject the test results by arguing that the genetic testing companies are owned by Jews and are “part of the Jewish-controlled media” and a “Jewish conspiracy” to confuse people about their ancestry, Panofsky said.

Also Read: But How Many White Supremacists Are There, Really? See on This Hate Map

The mirror test is: “Do you look in the mirror and do you see a Jew looking back at you? If not, you’re good,” Panofsky said.

“The test is based on the belief that if you have an elevated conscious as a white nationalist, you will see these things, you will be able to see mixed background, you can just see it, you don’t need a test for it,” he said.

When some Storm Front members found some Native American ancestry, the results were explained as signs that a “heroic white nationalist” spread his genes among native peoples, or that “non-white aggressive men raped white women,” Panofsky said.

Despite their “bad results,” most of the members posting genetic ancestry results were not kicked off the site, even though members must be “all white, all European, not Jewish, no exceptions,” Panofsky said.

Only a small number of posts – 100 out of 2,300 – flamed the members with “bad” genetic test results, posting messages like, “Hey, get out of here, kill yourself, don’t have kids,” Panofsky said.

“The idea that technology is a lightning bolt and the Gordian knot of racism is going to be cut by a sword is false,” he said. “I don’t think our technologies are going to give us simple solutions for this.”

The Southern Poverty Law Center says that Storm Front was created in 1995 as the first “major hate” website by a former leader of the white supremacist group Ku Klux Klan.

Genetic ancestry testing is becoming more popular through companies such as like Ancestry.com and 23andMe.com, which promote their services by suggesting that customers welcome the news of unexpected ancestry.