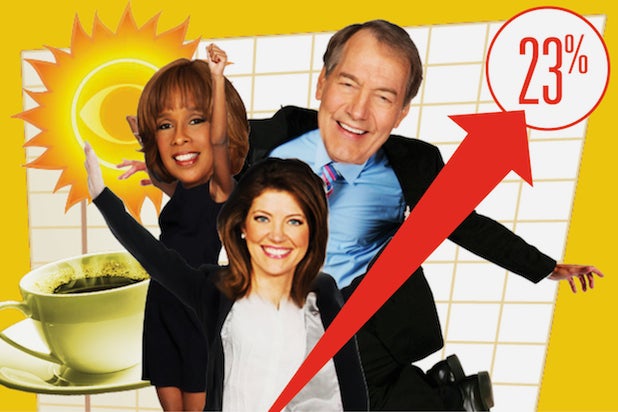 As “Today” and “Good Morning America” continue to duke it out for morning television’s top spot, “CBS This Morning” has been quietly but aggressively closing the gap. In the last couple of years, “CTM” has gone through a complete reboot in a last-ditch effort to save what was until recently a morning TV dud.

And it seems to be working.

While “Today” looks more and more like a reality show with one controversy after another, and “GMA” offers celebrity interviews earlier than ever, “CBS This Morning” has been doing the exact opposite. With an entire new team of anchors, helmed by a new executive producer, “CTM” has done a 180-degree reversal, offering its viewers a calmer experience and more hard news.

“We’re doing something different as opposed to trying to imitate what the other two guys are doing quite well,” executive producer Chris Licht told TheWrap. “You’re giving people another option.”

In the cutthroat world that is morning television, CBS was always the bridesmaid, never the bride. With a revolving door of suitors in the form of anchors and formats that never quite managed to engage viewers, the network’s morning show was headed for spinsterhood.

But since its debut in 2012, the network’s latest installment, “CBS This Morning,” anchored by Charlie Rose, Norah O’Donnell and Gayle King, is looking a lot more like marriage material. It managed to not only stop the ratings hemorrhage but also capture a big slice of the lucrative morning ratings pie. In less than two years, the show has increased its audience by an astounding 600,000 viewers — a 23 percent jump.

“As someone recently told me, ‘When you’re confronted with a hurdle, you become a hurdler’,” King told TheWrap. “You have no place to go but up.”

In mid-November, “CTM” did just that. The show averaged 3.5 million viewers, the best ratings the network has seen in more than a decade.

It’s still nowhere near its competitors. That same week, ABC’s “GMA” drew in 5.7 million viewers, while NBC’s “Today” had a little over 5 million. But while “Today” and “GMA” are struggling to hold on to audiences, thanks to an increasingly diverse marketplace, CBS’s numbers have been consistently on the rise.

“To be honest, it helped that we were creating a show from scratch,” O’Donnell told TheWrap. “Everybody came in with the same idea: creating the best morning show on television. And, we don’t have any of the restraints of the past shows.”

The team
Minutes after finishing their two-hour broadcast, Rose, King and O’Donnell are still buzzing with energy. They are in a good mood, evident even over the phone. And why shouldn’t they be? The three, along with Licht, have managed to do what no other CBS team has done before: turn the program into a relevant and viable player in the morning television world.

“I look forward to coming in every day,” said Rose. “And that’s the truth.”

How it started
After years of failed attempts at reviving its morning show, CBS decided it was time for a full gut job.

First, network execs brought in Rose, a veteran in the industry and a household name, and King, editor-at-large for “O, The Oprah Magazine” and Oprah’s BFF.

Interestingly, neither was sure about whether to accept the offer. “We were all in very good places in our careers,” said King. “We had nothing to prove.”

“I was an unusual choice,” said Rose. “I was someone who did late nights on PBS, not exactly somebody you’d think would be perfect for the morning. But I had also done work for ’60 Minutes,’ so I had a connection to the CBS family. Notwithstanding, not one person advised me to do this.”

O’Donnell, who was CBS’s White House correspondent at the time, was the last piece in the on-camera puzzle.

But while Rose and King needed a minute to think about it, O’Donnell jumped at the opportunity. “Here was a chance to do something different. I just said, ‘Why the f-ck not?'”

After realizing she had just dropped the F-bomb, O’Donnell started laughing. “I think the CBS publicist is having an aneurysm right now.”

“There’s some magic between the three of us,” said Rose. “The first day Norah was on the set, I wrote her a note that basically said, ‘Isn’t live television great?’ and she wrote me back, ‘This is the best job in television.'”

The set
Licht, it seems, was just what the doctor ordered. He brought with him some of the staples that made “Morning Joe” a force to be reckoned with. First, he changed the set, replacing the traditional news desk with a round table, so that the anchors faced each other rather than the viewers.

“That kind of setup really gave the best opportunity for the talent to relate to each other and the guests,” said Licht. “It’s like replicating the breakfast table.”

The format
All the anchors are on set all the time. That means they interview all the guests, instead of taking turns.

“We each bring something different to the interview,” said O’Donnell. “It also allows for a better flow between the anchors.”

The result was a better overall vibe. The balance between O’Donnell and Rose’s seriousness and King’s accessibility seemed to finally lighten up the atmosphere on set.

“You can’t engineer chemistry. We don’t ‘play TV,’ we try to be as authentic as possible. Our viewers are very smart and sophisticated,” said Licht.

They are also a tad older, and a far cry from an advertiser’s preferred audience. While the show has made impressive gains in the overall number of viewers, when it comes to the coveted 25-54 news demographic, the ratings have pretty much remained even.

While that’s not great news if you’re in the business of making money, some could and do argue that even maintaining numbers in today’s morning TV landscape is, in and of itself, no small feat.

The news
Breaking one of morning TV’s cardinal rules, Licht began serving people more hard news. A lot more. Gone are the cooking and gardening segments, along with the entire outdoor plaza, known for its cheering crowds and fluffy celebrity interviews. And you can forget about the token jolly weatherman a la Al Roker. “CTM” is all about no-comedy weather served without fuss by guest meteorologists from CBS affiliates.

Even the graphics are less seizure-inducing.

While there’s no question the show is doing better, it still has a long way to go to even be considered in the same ratings stratosphere as “Today” and “GMA.”

“It kills me that we’re in third place,” said Licht. “I grew up not even knowing there was a morning show on CBS, and I’m a news junkie. I literally couldn’t tell you the name of what was on CBS. It just takes disruption to change habits.”

And perhaps a little bit of chutzpah.