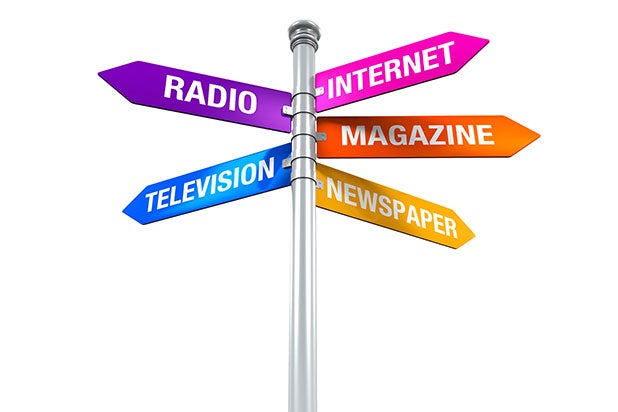 Let’s look back to 2002 in the chart below. If there was perfect balance, you would expect all media to fall near the red parity line (the “balanced ad spend and time share” dotted line on the chart). But the 2002 data indicates a major disconnect between ad share and time share. As you can see, newspapers and magazines commanded a disproportionately large share of the ad dollars, even though cable TV and radio at that time were more significant in terms of audience time. 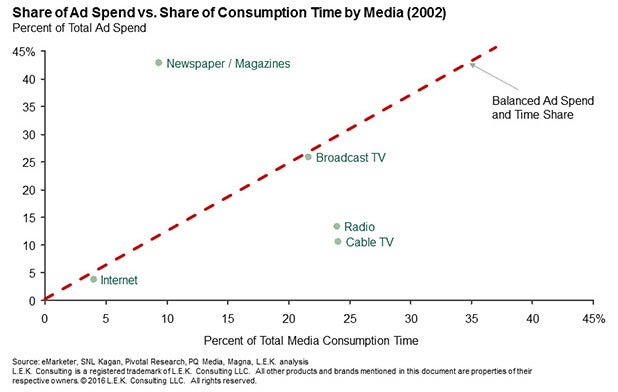 On average, ad spend corrects. Most notably, the percentage of ad dollars spent on newspapers dropped to approximately one third of what it used to be. Note that time spent reading newspapers continues to drop, and we would expect ad spend to drop further toward the parity line.

While consumer time spent on cable TV stayed roughly the same, advertisers shifted spend to cable TV because it was so far out of balance in 2002. Advertisers were underspending on the medium in 2002, and advertisers corrected their spend toward the balance line by 2015. 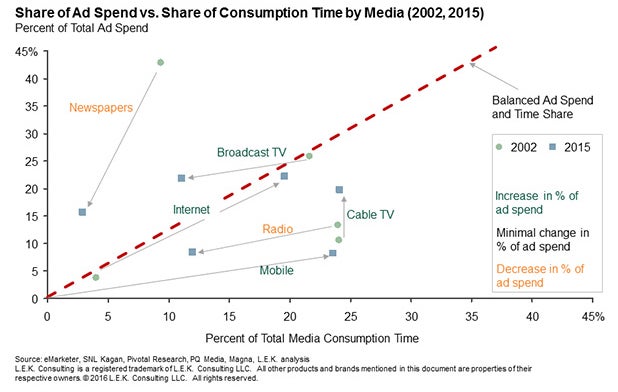 In summary, for almost all media, ad spend follows consumer time, and the dots tend to track toward the 50/50 line in the graphic (toward balanced ad spend and time share).

What does this bucking of the trend mean for the future of broadcast TV? If ad dollars follow time share, we could see a 25 to 50 percent drop in broadcast TV ad revenues. But for now, advertisers are sticking with broadcast TV. As hot as digital advertising seems to be these days, many advertisers find that it doesn’t provide the same reach and return on investment that broadcast TV does.

That said, broadcast TV should be on notice. Even a 10 percent decline in ad revenues could total a billion dollars. Our future posts will speak to the actions that the TV industry is taking to avoid any downturns and participate in mobile growth.

This is Part 3 in a series on television trends by Dan Schechter, Gil Moran and Michael Kaufman from L.E.K. Consulting’s Media & Entertainment consulting practice.

Better Than 'The Good Wife': 16 TV Series Finales That Stuck the Landing (Photos)

We’re not always happy with the way our favorite shows end, but we should celebrate the good ones when we get them

Not everyone thought "The Good Wife" finale was good -- it's pretty hard to nail the ending of a longform story like a TV show. But some TV endings were great! These certainly were, even if fans weren't necessarily happy with all of them.