For me, the fight started at 6:45 a.m. Tuesday, when I went outside to pick up the paper.

The location manager for a Comcast commercial shoot was instructing a subordinate to park a trailer and generator in front of my house.

“Please don’t put it there!” I shouted.

“No choice,” the location manager shot back. “That’s the only place for it.”

Thanks to generous film-location permitting mandated by the City of Los Angeles, which is locked in a desperate struggle to keep film and TV production work in town, the location manager and his crew have complete control of my side of the block. 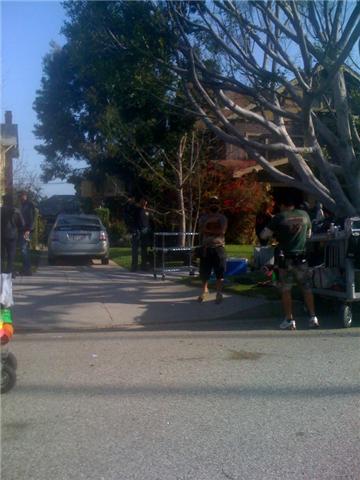 With location spending falling 19 percent in 2009, the steepest decline since 1993, according to the non-profit business development agency FilmL.A. Inc., the production company behind the commerical, The Cartel, can put that trailer and its loud generator wherever it wants to.

And from 7 a.m. to 10 p.m., the crew can freely prowl my street, situated in West Adams, an enclave of old homes near Downtown, talking as loud as they want on their hand radios. They can trample the recently seeded fescue grass on my walkway (hey, city property). They can whistle and catcall each other from down the block. They consume every available portion of street parking.

UPDATED: At one point, according to my next-door neighbor, the Cartel production manager showed up on his doorstep. He not only demanded that his family car be moved off the street, he informed my neighbor that they were going to set up a tent on front of his house — a mandate not described in any of our notifications.

My neighbor, a former Army Ranger who has a newborn daughter and wife in the house — both of whom could use a little peace and quiet — demanded to see the filming permit. The location manager couldn’t produce it, and walked away.

A FilmL.A. rep who accompanied this production manager, and supported his impromptu request to expand the scope of the production to my neighbor’s yard, also failed to produce this document. Still, according to FilmL.A. headquarters, the producers enjoy a kind of eminent domain.

“The Los Angeles municipal code says a temporary permit for filming can occur in any zone in the city,” said Todd Lingren, VP of FilmL.A. Inc., which acts as a liaison between producers, residents and the city council. Location permits in Los Angeles are obtained through the agency.

Lingren said FilmL.A. does its best to make sure production managers communicate with local residents and respect their property rights.

He said complaints in Los Angeles related to film and TV production are typically low, averaging about three per 100 shooting days.

On Tuesday, however, he conceded that his office received three complaints alone from residents about the behavior of the Cartel production crew (I didn’t file one myself). He reported them directly back to the production manager. No word yet on the outcome.

But nothing stopped the Cartel shoot from proceeding. By noontime, my street looked like a studio back lot, with hundreds of production workers milling about everywhere. A Craft Services lunch truck was parked in front of my house for a time. My wife, a formidable woman, who lived in the outback of Botswana and hung out with rugby players before meeting me, convinced the crew to move it down the block, bothering someone else, no doubt.

“We are somewhat limited in our ability to deny access to a neighborhood,” Lingren conceded. “We can try to dissuade somebody from filming there. But there’s only so much we can do to keep them from using a property. We walk a fine line. We have to keep the residents happy and keep the producers happy, but we have to fulfill the will of the city.”

If I’m not happy after complaining to FilmL.A., I’m advised not to try anything smart-alecky, like cranking up a stereo so loud it interferes with the production.

“The Los Angeles Police Department can file criminal charges for interference of a permitted activity,” Lingren explained, making me feel like I have less power than The Cartel today.

I’m advised to take up any issues with the FilmL.A.’s location monitor, Derek, who was somewhere in the neighborhood (I never saw him). Or, I could go directly to the location manager and talk to him. A perfect circle.

I tried that tactic in December, when a production crew for the ABC series “Flash Forward” was filming at my neighbor’s house (we’ll call him Richie). The house he’s staying at (he’s not the owner) was also the site of Tuesday’s commercial.

“You should be glad we’re here,” the “Flash Forward” location manager told me. “This is about jobs and revenue for the city.”

The guilt trip sort of worked on me. Growing up in the San Fernando Valley in the 1970s and ‘80s, I watched my father, an accountant and Air Force veteran, struggle to stay employed as the defense contracting business steadily migrated elsewhere.

Do I really want to be in the way of anything at a time when production days in Los Angeles are falling precipitously?

“I hear you work for TheWrap,” the “Flash Forward” production manager scolded me, while refusing my demands that several noisy trailers be removed from their perch adjacent to my children’s bedroom. “You should know how important this is.”

It is important, and I could totally get behind it, and put up with the inconvenience, which, I concede, is not that major in the scheme of things. People making noise in front of my house – big deal.

But it’s not just about civic duty for everyone! My neighbor Richie is getting paid… a lot.

Word on the street is that he made $200,000 several years ago when Sony took over the Craftsman he’s staying in to film “House Bunny.” The previously dilapidated home was also restored quite a bit by Sony (albeit with a sorority-pink paint job).

That production was actually well-received by the neighborhood. Crew members went door-to-door weeks in advance to carefully explain all that they were going to be doing. Care was taken to make sure the residents were comfortable. Wooden walkways, for example, were put outside trailers to keep parkway grass from being trampled on. And staff took care not to chat too loudly on their walky-talkies.

And I’ll admit that money helped, too. Besides contributing $17,000 to our neighborhood association, Sony paid each of us in the fallout area $500. Nobody extorted that out of them – it was just understood that the shoot was lengthy, and none of us wanted to feel like Richie’s bitch.

“You see that with features,” Lingren said. “Their crews have more time to walk the streets and learn the neighbors’ concerns.”

As I learned with “Flash Forward,” TV crews have less time. I had received the standard FilmL.A. production notice on my doorstep a couple of days before shooting. But by the time the production manager came to my door on a Wednesday morning to tell me about trailers parking in front of my house, it was too late to do anything about it.

We compounded the issue by accepting the $100 ABC Studios offered us to shut up — a Faustian bargain, given the level of noise and intrusion we put up with for two days.

But at least ABC kicked in money to the neighborhood kitty, too. On Tuesday, the Cartel crew completely passed on that privilege — the first time any of us can remember a production not paying those respects. (We use those funds for beautification projects, youth programs, and other community-related stuff.)

Over time, Lingren noted, if a crew or location owner receives too many complaints, FilmL.A. does have recourse.

“We have regular contact with all the decision-making parts that have a say regarding permits,” he explained. “There are lots of micro-approvals that go into this, and we can influence that. And if there is a lot of opposition to something, we can talk to the city council.”

As for The Cartel’s commercial production crew, well … I guess we’re their bitch until 10 p.m. tonight.

“It’s a lot harder for us to go back out there and deal with something that’s already happened,” Lingren added.

Daniel Frankel is a reporter for TheWrap.
x
Looks like you're enjoying reading