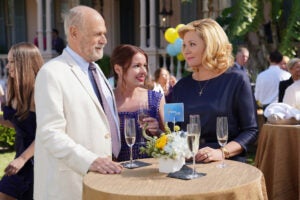 The Microsoft purchase this week of ZeniMax Media gives the Xbox parent company access to some of the most valuable gaming brands on the market and magnifies Microsoft’s potential to create gaming content outside of the console.

Microsoft, which will pay $7.5 billion to buy Bethesda Softworks parent company ZeniMax, is looking to expand its Xbox Game Pass service (often described as the Netflix of video games), and no price tag is too lofty for the company when it comes to access to storied games, including the “Doom,” “Elder Scrolls,” and “Fallout” franchises.

Microsoft’s bet that Game Pass and subscription gaming will soon become the main way that players buy their games appears to be paying off so far — Microsoft said Sept. 21 that 15 million people are subscribed to the service, up from 10 million at the end of April this year.

It’s unclear if Bethesda’s top games will now become exclusive to the Xbox platform or remain playable on other consoles — right now, you can play most Bethesda titles on practically every major gaming platform, including a few mobile games.

Bethesda didn’t immediately respond to TheWrap’s request for comment. Microsoft responded with a link to CEO Satya Nadella’s comments in Bloomberg, noting that it will most likely evaluate titles’ exclusivity to Xbox on a case by case basis.

“When we think about strategy, whether it’s in gaming or any other part of Microsoft, each layer has to stand on its own for what it brings,” Nadella said. “When we talk about our content, we want our content to be broadly available.”

Though Microsoft didn’t say it outright, it’s clear that the timing of the Bethesda purchase — just months away from the Xbox Series X debut– is part of a ploy to get people to buy the next-generation console.

“It is safer to assume that future titles will be coming to the Xbox Game Pass service, which is very likely more important for the future of the ecosystem than selling particular pieces of console hardware,” Piscatella said. “However, I’m also sure that if this acquisition helps sell more Xbox Series systems that Microsoft sure wouldn’t mind.”

Xbox Game Pass subscribers pay $10-$15 per month for console access, comparable to the services listed above. The subscription gives players access to over 100 games in the Xbox catalog and occasional discounts on online purchases.

Bethesda is working to adapt its widely popular “Fallout” franchise to television, and a series with Amazon Prime Video with “Westworld” creator Lisa Joy attached was announced this June.

In addition to “Fallout,” Bethesda’s vaults are overflowing with content that could easily be adapted from the game console to video or audio format, Piscatella said.

“I’m not completely sure of what IP is specifically part of the agreement, but there are some legendary IPs that could be involved… ‘Doom,’ ‘The Elder Scrolls,’ ‘Fallout’… just to name a few.”

Bethesda’s most talked-about upcoming project is a new installment in the Skyrim universe, “The Elder Scrolls VI,” which doesn’t yet have a release date.

“Bethesda hasn’t actively been putting themselves up for sale, but they’ve been an attractive strategic acquisition for several years,” said a person familiar with the deal who noted that talk of a Bethesda sale began floating around in 2018. “They have some of the top-tier IP; they’re strong on console and PC.”

Transitioning content from games to video is a heavy lift, but access to game development studios already well-versed in storytelling and visual design gives TV studios a leg up, Piscatella said.

“I have to believe that the studios are an incredibly — perhaps the most — important part of the equation,” Piscatella said. “Finding development studios and talent that can work on the blockbuster games of tomorrow is very difficult.. (and) that so much development talent will become a resource is a bit mind-boggling.”

Analysts say that while $7.5 billion isn’t cheap, the price tag isn’t too hefty compared to other similar deals in the gaming industry.

For further comparison, Disney paid $4 billion to acquire comic-book heavyweight Marvel in 2009 and another $4 billion million for LucasFilm in 2012.

Bethesda was established in 1986 and re-booted in 1999 when ZeniMax Media was created to handle the business’ finances. With the closing of the Microsoft deal expected in the first quarter of 2021, Bethesda is the latest legacy gaming publisher to be bought out.

“There aren’t that many publishers that are independent on the market that aren’t already publicly traded,” said the person familiar with the deal. “You’re just running out of dance partners at a certain point.”

Piscatella said he was unsure if this deal, while massive, is indicative that the gaming industry is due for another frenzy of mergers and acquisitions.

“We did experience a period of significant consolidation in the mid-2010s, but things had been a bit more settled in recent years,” Piscatella said. “I’m uncertain whether or not this will spur additional activity. This one seemed to catch everyone by surprise.”