In the last season of his HBO series, "The Wire," David Simon dramatized the troubles of the struggling newspaper industry. On Wednesday, Simon testified before the Senate Subcommittee on Communications, Technology and the Internet in a hearing on the “Future of Journalism." 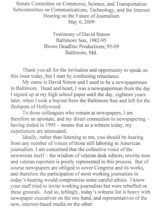 At issue in the Senate was the future of news and newspapers -- and if Congress needs to take action in an effort to help salvage the industry.

In his testimony, Simon, a former Baltimore Sun reporter, criticized bloggers, saying he has never witnessed one building relationships with sources in a courthouse or bar with policemen.

He added that news industry should stop saying things aren't their fault -- especially when many news organization opted to give their content away for free.

"How anyone can believe that industry can fund [editors and investigative reporters] by giving away its product away online to aggregators and bloggers is a source of endless fascination to me," he said.

But he also made clear that he is adamantly opposed to public funding for newspapers -- a solution some U.S. cities are considering.

"High-end journalism can and should bite any hand that tries to feed it, and it should bite a government hand most viciously," he said.

Instead, he suggested "an industry-wide transition to a paid, online subscriber base."