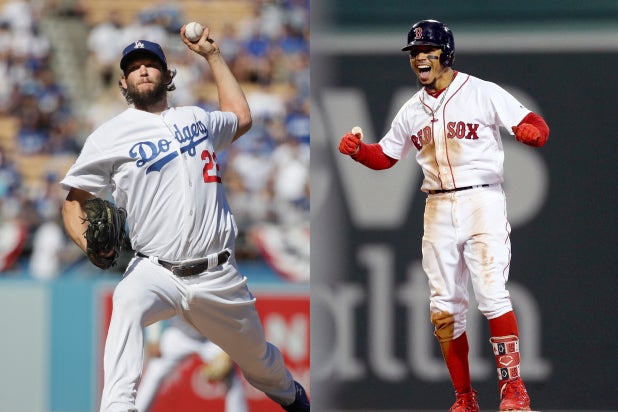 With the Los Angeles Dodgers and Boston Red Sox set to begin the World Series Tuesday night from Fenway Park, Fox is looking at a strong showing for the World Series for the third consecutive year.

Major League Baseball has been stuck with the narrative that it’s fading away from the public interest, and has trouble creating marketable stars. After all, one of the sport’s crown jewel events, the All-Star Game, has been hemorrhaging viewers, falling to a record low 8.7 million viewers this past July. And the Los Angeles Angels’ Mike Trout, widely regarding as the sport’s best player, is about as recognizable to American sports fans as NBA journeyman Kenneth Faried.

However, at least in the playoffs, baseball remains appointment television, though that didn’t appear to be the case a few years ago. The earlier part of this decade was a Nielsen nightmare for Fox — four of its five-least viewed World Series on record, including its worst-ever, came between 2010 and 2015.

But the last two years, buoyed by consecutive seven-game series, have been a turnaround for Fox.

In 2016, Fox posted its best World Series viewership in 12 years (22.8 million) when the Chicago Cubs ended their 108-year title drought over the Cleveland Indians. That was lifted by a whopping 40 million viewers that watched a Game 7 that went into extra innings, the best single-game MLB viewership since the 1990s. Last year, which featured the Houston Astros capturing their first championship over the Dodgers in 7 games, followed up with a respectable 18.7 million viewers, including 28.2 million for Game 7.

While the fine people of Milwaukee are no doubt licking their wounds after seeing their Brewers fall in Game 7 at home last weekend, Fox is surely happy the Dodgers prevailed (though they would never admit that publicly).

Milwaukee resides in the 36th-largest DMA (designated market area), while Los Angeles is No. 2 media market behind New York. The Brewers, who have never won a World Series, just don’t have the national following a team like the Dodgers does. Through the first five games of the NLCS, Fox’s coverage was trending down more than 30 percent compared to its last two League Championship Series, which included clubs like the New York Yankees, Cubs and Dodgers.

Fox did not have viewership numbers for the final two games of the series, but Game 7 on Saturday posted a 4.9 overnight rating (the percentage of homes in the top 56 markets that tuned in), the lowest ever for a Game 7 in an LCS on record.

The Red Sox, meanwhile, bring Nielsen gold wherever they go. Though TBS was down from 2017 with its coverage of the American League Championship Series, that was largely due to a shorter series — the Red Sox ousted the defending champion Astros in just 5 games. The Turner network noted that the 5.8 million it drew for this year’s ALCS was up more than 70 percent from the last time it aired the ALCS in 2016.

The Dodgers and Red Sox are two of the few MLB teams that can boast strong followings outside their cities. It’s likely, should this year’s Fall Classic go the distance, it would surpass last year’s ratings. Though it would probably fall short of 2016.

After all, there’s only so many times the Cubs can end a 108-year title drought.