I entered the arena this week all snarky and snarling, as if awakening from a tryptophan coma. It didn’t help when what was supposed to be an 11-minute hold Monday morning to solve a problem with Bank of America’s online service turned into 45 minutes.

One must find a healthy outlet for one’s darker moods, a way to vent. Yoga can lift the clouds. So can playing the guitar, a strenuous workout or a good long laugh.

Writing and the arts are good tonic, too — creativity being a prime refuge for malcontents from the beginning of time. The caveperson who did the drawings on the walls of the caves at Lascaux was probably a lousy hunter, got ridiculed for it and found that drawing on the walls with a burnt stick was good therapy. 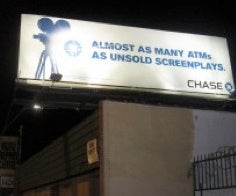 While I was on hold with the bank, in the interest of venting creatively, I began making notes about why this billboard on South La Brea Avenue is the worst billboard in Los Angeles.

It’s a company town — and this is what happens in company towns. Inventory gets stockpiled, and when the economy is troughing like it is now, it seems as if nothing moves off the shelves and more moves on all the time.

Everyone who’s ever written for films or television can show you a trunkful of unsold scripts, manuscripts, treatments and pitches. The bookshelves of every agent and D-person in the system are buckling under the weight of screenplays, spec pilot scripts and the galleys of unpublished novels to be pitched as film projects.

The titles of these projects are all written on the spines. Occasionally you might see the name of a film that actually got made ("Memento"), a few that might have gotten made ("Naked Kill 3"???) and many, many more that you suspect will never get made ("Cletus the Fetus").

So yes, cosmetically, the billboard states a kind of truth. Most screenplays remain unsold.

Emotionally and metaphorically, however, this billboard is a terrible affront to the industry, and to anyone who ever put time and effort into writing a screenplay. Here’s why:

Chase, the bank with all the ATMs, has never written a screenplay. Chase has never stayed up late at night after the kids have gone to sleep, or gotten up extra early in the morning before work to labor over a story in the long-shot hope that the story will be the ticket out of a podunk town or a flatlining job.

Chase has never been so inspired by the lives of others or moved by the tide of human events that the urge to turn the experience into a screenplay, a movie, a grand statement about the way you feel about the world, is every bit as biological and undeniable as a seed’s drive to seek the sun.

Chase has never sat around with its college buddies — Citi, B of A and WaMu — and co-written the next big teen comedy, only to discover that nobody’s making teen comedies any more, the market has shifted to romantic comedies.

Every one of those unsold screenplays was written by a human being with a dream, an idea, an inspiration.

Steinbeck put it this way in "The Grapes of Wrath": "The bank is something more than men, I tell you. It’s the monster. Men made it, but they can’t control it."

This is what makes the billboard on La Brea such a monstrous offense to the industry it claims to court.

All those unsold screenplays are the hard-won badges of our humanity. They are the flags that keep flying despite the hardships of battle. They are the symbols of our striving, of our willingness to believe in our dreams, and confront the obstacles that stand between us and their realization. They are our expressions of what it means to be alive in the world.

As Christopher Walken would say, "If an actual person spoke to me like that billboard does, I’d stab them in the face with a soldering iron."