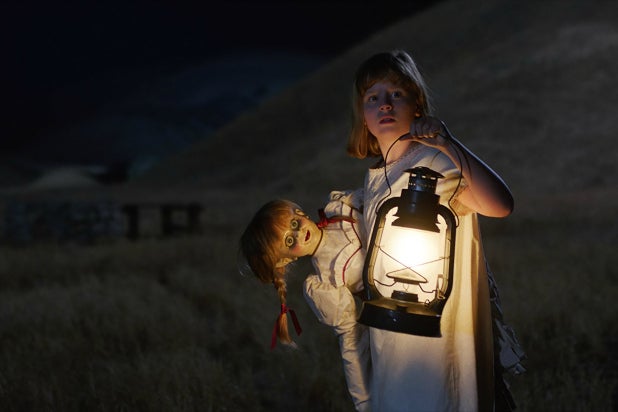 While one horror franchise falters (sorry, Dark Universe), another burnishes its rep in “Annabelle: Creation,” the enjoyable prequel/shriek-quel to the doll movie (“Annabelle”) that was spun from James Wan’s smash “The Conjuring” films.

What’s new? Not much as possession sagas go, but as a technical exercise, it’s creepcraft of a high order (certainly more so than “Annabelle”), in which one eerie doll, a few ominous closed doors, and a houseful of nosy victims and dark rooms do much to keep the thrill of the rejuvenated haunted-abode genre alive. The jaded may not join their more receptive moviegoers in arm grabbing, screaming, and loudly warning characters not to go in there, but they’re still likely to smile at the elegant skill on display.

It certainly cements its director, Swedish export David F. Sandberg — serving up his sophomore feature after last year’s hit scare flick “Lights Out” — as another welcome classicist when it comes to atmosphere, tension and judicious shocks. Like the patient simmer Wan can create before unleashing a spine-tingling image, Sandberg likes the low boil of orientation and build-up — the chance to appreciate a negative space in which nothing jumps out — before tickling your apprehension with sinister proof.

It might be a pair of faintly glowing eyes or a flicker of fuzzy movement in the background, or just another shot of that damned doll doing zilch but sitting there with its filmy skin, glampunk eyes, and crumpled dress. But it works like the hit of hot fat from a freshly made French fry. That you never see Annabelle move on its own — though you keep staring at it, waiting for it to do so — is one of this series’ cleverest and enduring gimmicks.

You’d think whoever built such a determinedly freaky-looking companion would have gone nowhere in the world of children’s playthings, and yet its creator, dollmaker Sam Mullin (Anthony LaPaglia), is clearly a successful artisan. He’s got a barn full of orders, a loving wife (Miranda Otto), and a doting seven-year-old daughter who leaves notes when she wants to play hide-and-seek with dad in their grand two-story farmhouse that sits all by itself in an empty, hilly expanse of golden fields. It’s also a chance for horror aficionados to start their accounting: scraps of paper with childlike scrawls (check), rural remoteness (check), barn (check), peekaboo games (check).

The sunny prologue ends with tragedy, though, and 12 years later the long-childless Mullin residence is to be the new home for a group of orphan girls and young nun Sister Charlotte (Stephanie Sigman, “Spectre”). Sam still gruffly wanders about the place as de facto host, but Esther Mullin is a bedridden recluse, her face partly covered with a mask, and there’s one upstairs room the six girls (ages grade-school to adolescent) are warned to leave alone.

For young, polio-stricken Janice (a captivatingly sympathetic Talitha Bateman, “Nine Lives”), recipient of a mysterious “find me” note one night, the forbidden bedroom is a mystery worth exploring away from the others, including same-age bestie Linda (Lulu Wilson, “Ouija: Origin of Evil”). Inside are the remnants of a little girl’s life, including a locked closet door inside which Janice discovers the titular doll.

As Annabelle begins to make Janice her demonic target, which the screenplay by Gary Dauberman (“Annabelle,” the upcoming “It”) methodically unpacks, “Annabelle: Creation” starts flexing its is-something-there-oh-yes-there-is muscles. As impresario of the series, Wan could trademark his formula for unnerving — for starters, weather-beaten old house, meet gnarled tree nearby — but that doesn’t make these tropes any less appealing.

Sandberg’s stewardship is commendably precise, too, working effectively in concert with cinematographer Maxime Alexandre and key “Lights Out” creatives — including production designer Jennifer Spence (who also worked on the “Insidious” movies) and editor Michel Aller — to leave as few dead spots as possible as things get hairier. (And like his first feature, diminishing light sources are potently deployed for white-knuckle results.)

Elsewhere, like the proverbial gun in the first act that must be used in the second, the early introduction of a dumbwaiter and a mechanized stair lift turn into nifty suspense settings later. There’s even a satisfying tie-in to the events that kickoff the last movie (which happen years after the “Creation” storyline).

As always, there’s an explanation for the evil goings-on, left for Otto to reveal from behind those diaphanous bed curtains, and eventually a turn toward R-rated ickiness, although thankfully more fleeting than flaunted. Also superficial but never really thematically explored are the hints of “The Exorcist” meets “Picnic at Hanging Rock” that arise. But these amount to quibbles when the nuts-and-bolts spookiness is this well sustained, and the gentle shake of a bunk bed (what just climbed in below?) is more unsettling than a demon in view.

At heart “Annabelle: Creation” is a professional jitters-fest, made with deep-seated esteem for the genre rather than cynicism about a box-office sure thing.