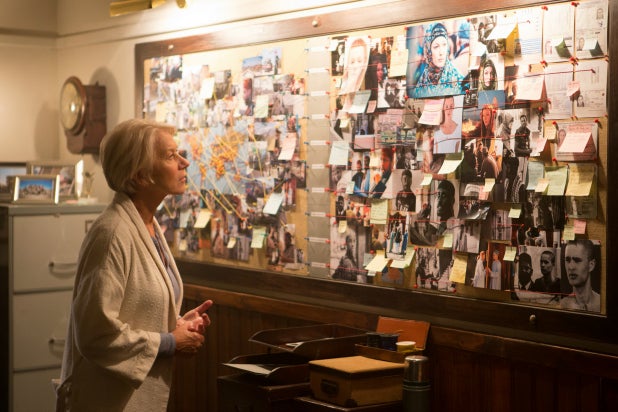 “Eye in the Sky” is burdened with two unavoidable bummers: First, camouflage turns out to be the one pattern on earth that’s unflattering to Helen Mirren. And second, it’s the late Alan Rickman‘s penultimate film. (His final, “Alice Through the Looking Glass,” comes out in May.)

OK, admittedly there’s also a bit of absurdity in the script, but considering it involves bureaucratic pingpong, perhaps it’s not absurd enough. Director Gavin Hood (“Tsotsi,” “X-Men Origins: Wolverine”) and TV writer Guy Hibbert have crafted a tight thriller about a single event: the mission to capture terrorists in Nairobi. The key word is “capture,” which does not warrant “kill.” And therein lies the 102-minute rub.

Mirren plays Col. Katherine Powell, second in command of the joint U.S.-Britain operation. Her team — including her superior, Lt. General Frank Benson (Rickman) — has intelligence that a handful of the terrorists on the U.K.’s most-wanted list, most notably British-born extremist Susan Danford (Lex King), will be meeting at a certain location. The idea is to send in Kenyan forces to round up the lot.

But then a woman who might be Danford follows a caravan to a house in an area full of Islamic extremists, meaning that the sighting of Kenyan soldiers would likely spark unrelated bloodshed. Worse, once they do confirm (with the use of a stealthy, bird-shaped camera) that Danford and other wanted terrorists are gathered there, it’s not long before Powell and her team spy a bed laden with explosives and vests.

See Video: Toronto: Barkhad Abdi on Working With Helen Mirren in Drama 'Eye in the Sky'

This latest intel makes it pressing to get the mission changed from “capture” to “kill,” partially to save people’s lives from a certain suicide bombing, but also because Powell has been trailing that treasonous bitch for too long to lose her now.

But wait: What about that little girl selling bread near the targeted house?

Hood and Hibbert successfully avoid a telegraphed ending that seems inevitable from the start. (Aww, little Alia just wants to play with her hula hoop in the yard in between shilling her mother’s loaves.) The real appeal of “Eye in the Sky,” however, is twofold: The technology used for this operation is incredible, with Powell instant messaging (well, that’s actually not that incredible) Benson, her drone pilot (Aaron Paul) in Las Vegas, and her Kenyan soldier (Barkhad Abdi, “Captain Phillips”) in Nairobi with split-second ease; meanwhile, the bird camera and a similarly crafty beetle peeper let the team watch nearly every movement in that house. And with all these international players tensely eyeing the situation, Powell’s seemingly no-brainer request to have her pilot drop hellfire on the location instead of attempting a capture goes up the chain of command: Benson is sitting in a room full of British politicos and advisers who somewhat knee-jerkingly argue about the ethics of a kill op. The top men in the room whiff and relay the decision to even further higher-ups, and so on, and so on, even interrupting one politician’s vacation. And Powell anxiously (and furiously) waits, as both she and Benson stress that they need a decision now.

No one wants to pull the trigger, not even Paul’s pilot. Sure, eliminating the most-wanteds and their suicide bombers would likely save upward of 100 lives. But Alia would be the collateral damage. Which would anger the public more? After all, some of these people have elections to think about.

The volley is infuriating but captivating. Mirren, as ever, is both polite and brusque, her petite va-va-voomness never undermining her credibility as a tough military top-ranker. And Rickman — oh, that dryly sarcastic voice. He’s given some comic moments, mostly before he enters the war room as he shops for a Chatty Cathy-type doll for what appears to be his daughter’s birthday. (To someone on the phone, he slowly reads a description: “She babbles when it’s time for beddy-byes.”) And your heart aches a little in a “Space Oddity” moment.

The resolution to this feature-length problem doesn’t come easy, but a decision is finally made. It’s unclear who will bear the brunt of the inevitable backlash, but one thing is evident: You eventually understand the film’s opening quote, “In war, truth is the first casualty.”