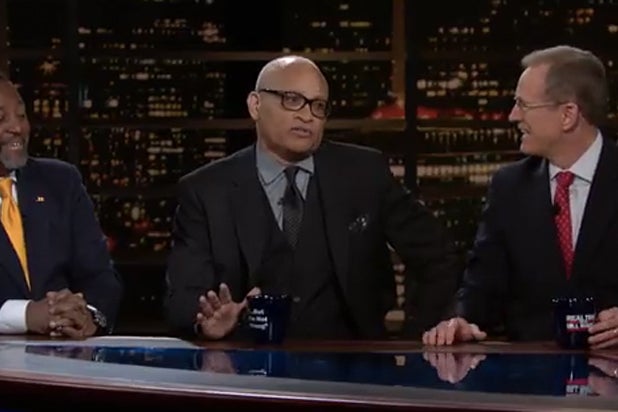 Milo Yiannapoulos’ appearance on “Real Time with Bill Maher” might have been somewhat tepid. But on “Overtime,” the YouTube exclusive “Real Time” aftershow, the sparks flew furiously when panelist Larry Wilmore tore into Yiannopoulos when the Breitbart editor went off on a transphobic rant.

At the start of the 13-minute edition of “Overtime,” Maher asked Yiannopoulos why he singled out a transgender woman during a recent university appearance. Yiannopoulos justified his behavior with a rant aimed at the transgender community generally. (You can read more about that here.)

Yiannopoulos then defended efforts to force transgender people to use bathrooms assigned to their birth gender, a position Maher called “not unreasonable.”

Wilmore spoke up, comparing the struggle of transgender people to the struggles of gays. He said it was easy to scapegoat an entire group based on extreme examples.

Things heated up from there as Wilmore and fellow panelist Malcolm Nance pushed back, until Yiannapoulos resorted to ad hominem attack.

“We were having such a nice time, but you [Bill Maher] always have such awful people on your show,” Yiannopoulos said. “They’re so stupid.”

After a flustered Maher began to talk back, Yiannopoulos continued: “You need to start inviting higher IQ guests.”

That’s when Wilmore had had enough. “Hold on Bill,” he said, turning to Yiannapoulos, to calmly add, “You can go f— yourself.”

Moments later, he objected to Yiannopoulos’ insults at actress Leslie Jones: “Leslie Jones is not barely literate, you can go f— yourself for that as well.”

At that, Maher weighed in, castigating Yiannopoulos for the personal attack, adding about Wilmore, “this guy has done things that allowed you to f—ing live.”

Watch the whole exchange below.

On Aug. 18, “The Nightly Show with Larry Wilmore" will come to an end after 20 months in the Comedy Central timeslot once held by "The Colbert Report." While it never came close to reaching the numbers of its predecessor, Wilmore proved in the series' 259 episodes that he could be as powerful a satirist and commentator as Jon Stewart with his takes on major political and social stories.
View In Gallery