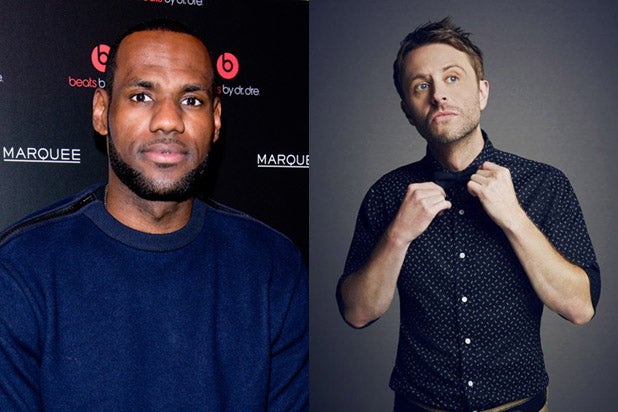 Lebron James and Chris Hardwick are bringing a new game show called “The Wall” on NBC, TheWrap has learned.

James will executive produce the series under his SpringHill Entertainment banner along with Hardwick. Hardwick will also host the show.

This series will feature two-person teams who will compete for cash prizes that can be won or lost in an instant, depending upon whether a ball bounces your way, or a trivia question is answered correctly.

The game will be similar to the “Price Is Right” game Plinko. A ball will come down a wall made up of a field of pegs, with each row offset from the previous row. At the bottom of the board are slots marked symmetrically with monetary values.

“I’m excited about this series because it’s different than anything on TV right now. It’s got everything — excitement, drama, and action — and it’s something the entire family can watch and root for together. I believe Chris Hardwick brings all of that together in a really entertaining way that people will enjoy,” James said. “For SpringHill Entertainment, it’s about creating quality and innovative content for all types of audiences, and I’m proud of the exciting projects we continue to be a part of.”

“The Wall” was developed by Glassman Media in conjunction with CORE Media. In addition to James and Hardwick, Maverick Carter and Andrew Glassman will serve as executive producers.

A premiere date for the series has yet to be announced.