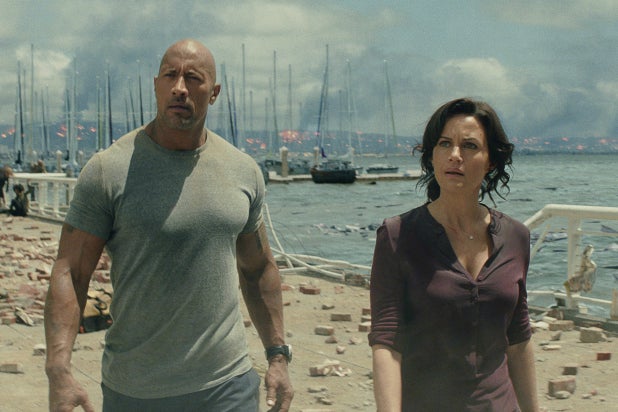 The debris rains down on the just and the unjust alike in “San Andreas,” another movie designed to sate our apparent collective desire to watch Los Angeles crumble into the sea. While the new film doesn’t quite reach the level of the 1970s Irwin Allen disasters to which it aspires, it does give you an idea of what Allen might have wrought if he’d had a 21st century CGI paintbox at his disposal.

The film’s characters mostly fall into tropes that disaster fans will find familiar: Ray Gaines (Dwayne Johnson), a helicopter pilot with the Los Angeles Fire Department’s Search and Rescue team, is your basic Charlton Heston alpha-male-in-charge when disaster strikes, while Paul Giamatti plays Dr. Lawrence Hayes, allowing him to be the actor who’s too good for this kind of film, saddled with pages of science-heavy exposition. (“Rhubarb rhubarb tectonic plates.”)

Ray’s also got a bit of the “Taken” about him, since he’s got a nubile-but-resourceful teen daughter (Blake, played by Alexandra Daddario) and an estranged wife (Carla Gugino as Emma) with a rich and untrustworthy new boyfriend (Ioan Gruffudd). (In an act of both foreshadowing and hubris, the latter is currently building San Francisco’s tallest skyscraper.)

Throw in British tourist Ben (Hugo Johnstone-Burt) as a love interest for Blake, and Ben’s younger brother Ollie (Art Parkinson, “Game of Thrones”) to channel Eric Shea’s precocious know-it-all from “The Poseidon Adventure,” and you’ve got yourself some human drama once the titular fault line starts shifting and L.A. and San Francisco start collapsing.

That’s the idea, anyway: if there’s a “San Andreas” fault, it’s that director Brad Peyton (“Journey 2: The Mysterious Island”) and screenwriter Carlton Cuse (“Lost”) present the effects of a massive global disaster on a mere handful of characters who have names and significant dialogue. We’re not supposed to notice that Ray, who’s supposed to be helping victims of the collapsed Hoover Dam, ignores his orders and commandeers a helicopter for the sole purpose of rescuing Emma and Blake.

Thankfully, the action set pieces are exciting enough, and come at such a successive clip — “Oh, s–t” may be the film’s most repeated line of dialogue — that it’s only afterward that you have the chance to pause and ask questions about the plot. There are big, loud entertainments like “Mad Max: Fury Road” that I find myself enjoying even with my critical-thinking cap on, and then there are movies like “San Andreas” that somehow go straight to my lizard brain; this movie’s dumb, and its portrayal of urban devastation borders on the pornographic, but I’d be lying if I said I wasn’t entertained.

Johnson plays most of the film in his usual stoic tough-guy style, but he does lighten up a bit when he and Gugino reminisce about their characters’ daughter who died, a subplot which mainly exists to underscore why they’re so hell-bent on rescuing their remaining one. Daddario and Johnstone-Burt have sweet chemistry between them, and it’s fun to imagine what unscripted subtext Giamatti decided to play just to keep himself interested in a character whose main task is to give dire warnings to a TV interviewer (Archie Panjabi).

The real star here is, of course, the earthquake, and while 3-D IMAX will no doubt accentuate its virtues, it’s a pity that the distributor didn’t attempt to bring back Sensurround for the occasion. Sure, it’s a cheesy, old-school gimmick, but those adjectives can easily be applied, in a mostly positive way, to “San Andreas.”