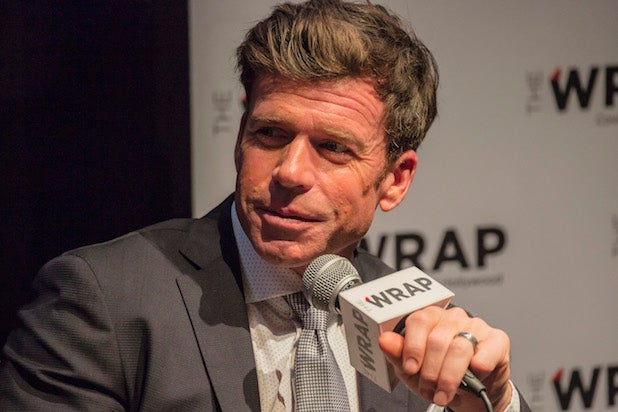 Taylor Sheridan, the Oscar nominated screenwriter of “Hell or High Water,” says his film captures the pulse of rural, small town America that led to Donald Trump getting elected.

“Hell or High Water” is set deep in West Texas, in community where there are no social services, Sheridan says. Planned Parenthood is three states away, so they don’t understand why funding is going there. And money meant for highways doesn’t make sense because their highways never get fixed.

“All these things, when you study them, start to explain the political leanings that have nothing to do with ideology. It has to do with ‘how can I control this bubble right around me that’s imploding?'” Sheridan told TheWrap’s Editor-in-Chief Sharon Waxman at a screening of his film Wednesday night.

“We can’t assign beliefs to people who don’t have a voice to express them. And we can’t assume what someone thinks,” Sheridan said. “Those assumptions have created the situation we’re in today.”

Sheridan says “Hell or High Water,” which is nominated for four Oscars including Best Picture and Best Original Screenplay for Sheridan, is a film about “the respect of the individual.” In it, two brothers played by Chris Pine and Ben Foster plan to rob banks so that they can pay off the mortgage on their home. Meanwhile, the Texas rangers investigating their case are a racist cop near retirement played by Jeff Bridges and his Native American partner. Their relationship is often bristle, but they all share a feeling of being slighted and oppressed by banks and the government.

It’s the reason why Sheridan balks at how comedians and pundits like Bill Maher present their politics.

“Joking about the flyover states; we sit there and talk about diversity, but we’re going to lump people in an entire region together and sit there and attack them and assign beliefs to them in counties where the average income is $33,000 and we’re going to align them with the top one percent,” Sheridan said. “We attach all this stuff conveniently to people that have absolutely no connection to it. It’s unfair.”

Also Read: 'Soldado' Screenwriter on Why Emily Blunt Won't be in 'Sicario' Sequel

Sheridan wrote the screenplay for “Hell or High Water” in 2011. He quit his job acting in shows such as “Sons of Anarchy” and sought to tell his own stories, including the screenplay for Denis Villeneuve’s “Sicario.” But he had no idea of the political climate that would be on the horizon.

“‘The Apprentice’s’ numbers were down,” Sheridan joked. “I didn’t see that coming.” But even then, Sheridan saw his once vibrant home suffering due to an economic and literal drought in the region, a final “nail in the coffin to a way of life that I thought was a constant.” And at the same time, he saw the media vilifying and attacking those within his community.

“I knew these people, and they weren’t what Bill Maher was saying they were,” he said. “This was the base of the Democratic party for 100 years. They felt really betrayed, and these are the consequences of what we’re dealing with now.”

But poverty is poverty, Sheridan added. The superficial dividing lines between race, gender and religion he feels serve only to keep the rich making money and the poor down. “Hell or High Water” aims to bring those affected by poverty and those in power together.

“As soon as we start focusing on the similarities and not the distinctions, then we got ‘em,” he said.

TheWrap's Screening Series features the most significant films of 2016. Screenings are followed by question-and-answer sessions with the film's talent. The films are open to members of the Academy of Motion Picture Arts and Sciences, the DGA, PGA and WGA members, and to subscribers to TheWrap's daily email newsletter, First Take.
KEEP READING..