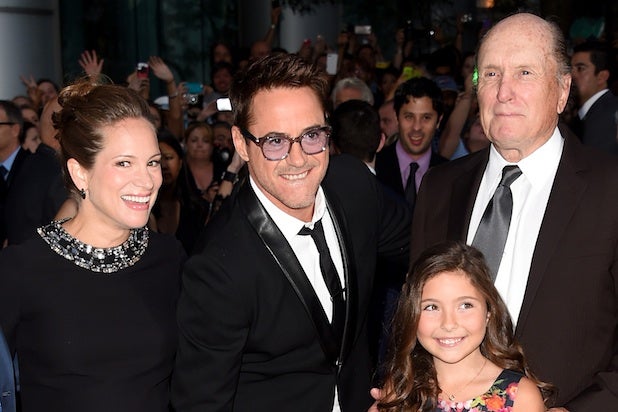 Robert Downey Jr. and Robert Duvall took the spotlight at Thursday’s opening night gala at the Toronto International Film Festival, with their performances in “The Judge” drawing a sustained ovation from the crowd at the huge Roy Thomson Hall.

At the same time, reaction was more muted for the film itself, a change-of-pace drama from the director of “Wedding Crashers” but probably not a movie likely to (or, for that matter, designed to) draw much awards buzz this Oscar season.

In other words, it was business as usual for a TIFF opening night.

The festival doesn’t have a reputation for scheduling its strongest films to kick things off. Instead, the prime screening nights for films like “Argo,” “12 Years a Slave” and “Gravity” tend to be Friday, Saturday and Sunday, while the opening slot in recent years has gone to less awards-worthy movies like the crowd-pleasing sci-fi flick “Looper,” the U2 documentary “From the Sky Down” and last year’s opener, Bill Condon‘s underwhelming “The Fifth Estate.”

“The Judge” is part courtroom drama and larger part character study, with Downey as a slick and effective criminal lawyer who reluctantly returns to the small town where he grew up to defend his estranged father (Duvall), a judge of 42 years who is accused of murder.

Also read: Toronto Preview: The Big Festival Arrives With a Winning Streak on the Line

“They say that they don’t make movies like this anymore,” said TIFF artistic director Cameron Bailey when he introduced the movie. “Dramas. Movies where you can’t tell the good guys from the bad guys by looking at their suits.”

In fact, in “The Judge” the lines are pretty blurred – but the guy who wears the nicest suits is Downey’s character, an extremely flawed hero we like mostly because he’s played by Downey.

The performance is glib, charming, charismatic and more than a little tortured by mistakes and regrets from the character’s past; if we’ve seen Downey act like this before both on and offscreen, the part is still a good fit, and he inhabits it effortlessly.

And Duvall, who may get the biggest awards push of anyone in the film, also plays the kind of role we’ve seen him in before: a tough-as-nails father with an inflexible sense of how things should be done and little sympathy for a wayward son.

“Robert Duvall won’t do anything if it’s not true,” Dobkin told TheWrap at a Warner Bros. party following the screening. “I don’t think there was a single take of his that I couldn’t have used.”

Dobkin also praised Downey’s performance for its subtlety, and said that the actor, whose wife produced the film, had instructions for the director early in the process.

“He said to me when we started filming, ‘We’re going to be dealing with some really intense s— here, so I’m counting on you to bring some laughs.'”

Dobkin does work some laughs into the film, which the director admitted was clearly designed for audiences more than critics. “I could have made a much drier version,” he said, “but I wanted to go in this direction instead.”

Critical reaction was indeed mixed — but the message on opening night, which was repeated more than once during the pre-screening speeches, was that Toronto is a festival for audiences, for the people. (It gives out an audience award, but not a jury award.)

The awards handicapping will come later; on Thursday, “The Judge” did its job and brought down the gavel to open the 39th TIFF.