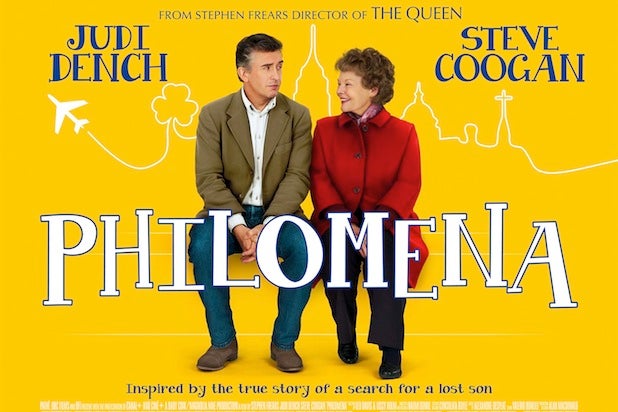 The Weinstein Company has won its formal appeal on the MPAA’s initial decision to hand their upcoming awards contender “Philomena” an R rating, thereby revising it to a PG-13, the company announced Wednesday.

TWC and attorney Bert Fields argued the MPAA’s ratings rule that more than one “harsher, sexually-derived word” used as an expletive automatically garners a film an R rating. TWC and Shields had contended that, based on its subject matter and context, “Philomena” should be granted a more family-friendly PG-13.

Coogan was also on hand at the MPAA hearing in Los Angeles on Wednesday to speak on the film’s behalf. Ethan Noble, chairman of Motion Picture Consulting, also assisted TWC and the filmmakers in the ratings appeal.

“We owe this victory to Barbara Broccoli, producer of the James Bond series, Daniel Craig and Sam Mendes who because of their relationship with Judi Dench gave permission to spoof the ratings system using the M character,” said Harvey Weinstein. “We know that went a long way into shedding light on the themes of the movie and the fact that the PG-13 rating was correct. We are glad the MPAA has a good sense of humor and with the cooperation of Barbara and her team it was proven once again no one does it better than James Bond. And my sincerest congratulations to Steve Coogan, who went to the MPAA and defended the case personally.”

“This is a film that evokes an overwhelmingly positive response from people. I’m delighted children have already seen it and have responded to it so positively. We felt the MPAA had made the wrong decision in handing the film, which has no violence or lewd material and the bare minimum of adult language, an ‘R’ rating,” added Frears. “I am overjoyed they’ve changed their ruling in order to give families like mine an opportunity to see this film together. Now we can let the whole world see it.”

“The MPAA’s stance on language often proves itself to be too black and white, not taking into account a film’s overall subject matter. ‘Philomena’ is one such instance,” said Fields. “To put this film in the same category as sexually explicit and violent films would have been a disservice not only to the film but audiences as well. This is a huge victory for the filmmakers and Weinstein Company.”

Based on “The Lost Child of Philomena Lee,” the 2009 investigative book by BBC correspondent Martin Sixsmith, “Philomena” focuses on the efforts of Philomena Lee (Dench), mother to a boy conceived out of wedlock — something her Irish-Catholic community didn’t have the highest opinion of — and given away for adoption in the United States. In following church doctrine, she was forced to sign a contract that wouldn’t allow for any sort of inquiry into the son’s whereabouts. After starting a family years later in England and, for the most part, moving on with her life, Lee meets Sixsmith (Coogan), a BBC reporter with whom she decides to discover her long-lost son.