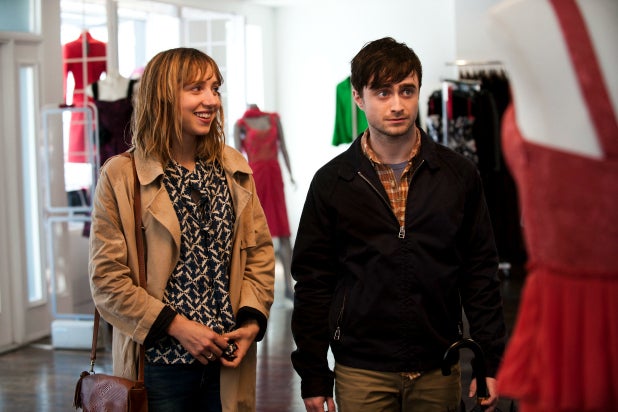 Perhaps the best thing about “What If,” the new romantic comedy from director Michael Dowse (“Goon”), is that for all of its banter and batted eyes, from its awkward introductions to its inevitable climactic declarations of love, everyone in it feels like a real human being. They make mistakes, they talk over each other, they recoil or lash out when their feelings are hurt.

Adapted by Elan Mastai from a stage play by T.J. Dawe and Michael Rinaldi, “What If” doesn’t follow the traditional rom-com template where our young couple holds hands in a montage set to a chiming, catchy pop hit, and we can’t hear what they’re saying as they pretend to fall in love. And thank goodness for that.

See video: Daniel Radcliffe Is a Classic Romantic Comedy Lead in the Latest ‘What If’ Trailer (Video)

What we get instead is much more real and much more engaging, as heartbroken med school dropout Wallace (Daniel Radcliffe) meets clever, not-alone-but-somehow-lonely Chantry (Zoe Kazan) at a party; they click, they joke, they connect, he walks her home. She has flashing eyes, a delicate cupid’s bow of a mouth — and a boyfriend of five years. Still, Wallace and Chantry agree to be friends, even as he can’t help but hope and think of more.

Already, we have the set-up for what could be an old story in new, hip clothing — “When Harry Texts Sally,” say — but the great thing about “What If” (whose original title, “The F Word,” was a far smarter, sharper one altered in part to mollify the MPAA) is how frank and sharp its conversations are: blunt about sex, sincere about feelings, smart about tactics, tough where it counts.

Also helping elevate matters is the cast, including Adam Driver (“Girls,” “Inside Llewyn Davis”) as Wallace’s old college roommate Alan and Mackenzie Davis (“Halt and Catch Fire”) as Nicole, whose initial lusty meet-cute turns into a very real relationship, fast-forwarding through dating, engagement, and marriage while Wallace and Chantry are standing there looking at each other on pause. Davis and Driver are both scene-stealers, and they do so with aplomb here. (Rafe Spall, as Chantry’s longtime boyfriend Ben, is also quick, funny — politely waving a knife towards Wallace and asking him his intentions towards Chantry point-blank when they meet — and still utterly real.)

The leads are, fortunately, just as good as the bright and shining supporting players. Radcliffe is goofy and gregarious and slyly self-mocking here, capturing Wallace as a good man and an awful dancer. And after Kazan’s exemplary work undermining and over-thinking the genre in “Ruby Sparks,” she seizes on the chance to play real romance and real comedy here, and excels. Chantry isn’t some vintage-dress wearing whackadoo magical elf; she’s a career woman, a creative person, a good friend, and hardly perfect.

Also read: Daniel Radcliffe on Playing Adult Harry: ‘My Inclination Is to Say No’

Dowse, the director of the truly great underseen hockey comedy “Goon,” also makes smart technical and artistic choices. There’s a touch of animation to add a small note of whimsy and magic, and Dowse also sets the film in Toronto, a city too often passed off as anywhere else on-screen.

From its boutiques to its theaters, its funky-shabby apartments to its offices and parks, Toronto, in Dowse’s affectionate eyes, comes off as a very big city that can also, in a good way, feel like a small town. (In fact, if there’s one caveat, Toronto in “What If” is a lot whiter, straighter, and more homogeneous than it actually is, but it’s still nice to see the city play itself.)

The score, by A.C. Newman (of The New Pornographers, and a solo artist in his own right) is also perfectly crafted, neither obtrusive nor forgettable.

The best thing about ‘What If,” though, is the writing and performance as applied to the two main characters, flawed and fallible and likable, both overly-sensitive and all too oblivious. Their speech is peppered with “um,” “like,’ and “totally,” even as they’re offering observations like Wallace’s sweeping statement that “In life, love is an all-purpose excuse for selfish behavior.” (Radcliffe takes to the timing, tone and self-deprecation required here like a duck to water; hopefully, other directors will recognize.)

What if smart, talented people re-invigorated the rom-com with sass, sex, and sarcasm while still keeping the romance and raw emotion? Thanks to the winning, warm “What If,” that hypothetical question has a very real — and very good — answer.