Roland Emmerich’s mega disaster mash-up does exactly what it says on the tin. His puree job of every end-of-the-world movie ever made – with big dollops of “Airport," “The Poseidon Adventure” and “Titanic” thrown in for good measure – is spectacular and a terrific popcorn entertainment. It’s also one of the best comedies of 2009, although it’s open to debate how intentional the laughs are.

Not sure about a TV series spin-off, though, unless it can star Tina Fey and Jeremy Piven.

2. WANT QUALITY? CALL ELIJAH WOOD
“Counting The Stars”, a new report by Miller-McCune Online Magazine, has some interesting conclusions about which Hollywood stars fare the best with the critics. By analysing Metacritic reviews from the past 10 years, academic David Sparks has concluded that the movies of Elijah Wood rate better than anyone else’s, with an average rating of 75.3/100 for his works. Phillip Seymour Hoffman, Viggo Mortensen and Clint Eastwood were close behind. The lowest scores? Matthew Lillard, Eddie Griffin and Freddie Prinze Jr. I’m assuming they didn’t rank Michael Madsen’s movies.
http://miller-mccune.com/culture_society/counting-the-stars-1553
3. EVIL DEAD TO RISE!
I’ve said it just about every time that a remake is announced: if a filmmaker loves the original so much, why not re-release it? Happily, that’s what Sam Raimi is doing with his debut, 1981’s awesome “The Evil Dead”. The landmark horror will be hitting theaters in the US and Canada in a string of midnight screenings next year. Nice.
4. YOGI BEAR: THE MOVIE?
Ouch. Maybe some midnight marathons of the corny old cartoon would be preferable to a live-action/CG animated version of “Yogi Bear." Anna Faris, Dan Aykroyd and Justin Timberlake are said to be starring in this adaptation, shooting in New Zealand next month, with “Journey To The Center Of The Earth” director Eric Brevig behind the camera. Faris is charming but her track record at choosing good comedies is terrible. As for her male co-stars, well think no further really than, say, “The Love Guru” and “Christmas With The Kranks”. And “Journey To The Centre Of The Earth” had all the heart and soul of a theme-park ride. So, sounds good!
5. CAN YOU DIG IT?
“The Canyon” offers a simple premise, a couple of good-looking stars and a breathtaking natural backdrop. While I doubt it’ll make “Paranormal” money, it looks like a tense, realistic little thriller.
6. JIMCARREY.COM = NUTZO

Taken your meds today? Think Jim Carrey’s “Eternal Sunshine Of The Spotless Mind” was too clear-cut? Well, check out the actor’s website, which brings all sortsa crazy.
http://jimcarrey.com/ 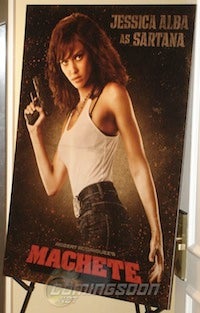 But here’s some much more traditional key art. Hey, it worked once for “Sin City”, right? Talk about knowing your market. The new Robert Rodriguez film “Machete” – based on the awesome fake trailer in “Grindhouse” – has its first Jessica Alba-heavy poster, which was found by www.comingsoon.net.

http://www.comingsoon.net/news/movienews.php?id=60616
9. ANOTHER SIDE OF ALBA
Whoa, check out the AFM promo trailer for Michael Winterbottom’s “The Killer Inside Me” for a darker – much darker – look at Jessica Alba. With Casey Affleck on truly sinister form, this looks like “Bad Deputy Sheriff” crossed with “No Country For Old Men”.
10. THE NEXT J.K. MEYER OR STEPHENIE ROWLING?
Talk about a story to inspire struggling writers everywhere. An Australian mother of four, whose first novel made $100 and whose second novel was rejected by every publisher she sent it to, has now had her third book, “Beautiful Malice”, acclaimed as the next Harry Potter or Twilight.
http://www.smh.com.au/news/entertainment/books/milliondollar-mum-hailed-as-new-jk-rowling/2009/11/06/1257247749015.html?autostart=1
x
Looks like you're enjoying reading