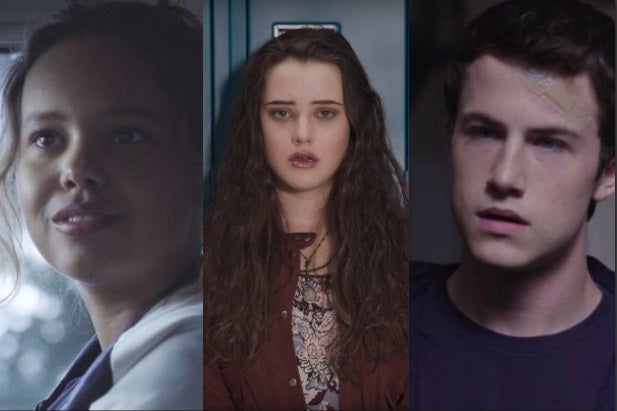 The Netflix Original show “13 Reasons Why” has drawn a lot of conversation for its nuanced treatment of suicide, high school relationships, and the way people treat each other as they’re growing up. Almost everyone on the show makes mistakes and wrongs each other — but not everybody is completely awful (or wholly good). Here’s every character in “13 Reasons Why,” ranked by how hard they try to be better.

Jeff Atkins (Brandon Larracuente)
Jeff’s just a really good dude. Everybody loves him and he uses his popularity to make the lives of other people, like Clay, better. That he wasn’t a bigger part of “13 Reasons Why” is a bummer. A lot of people could have learned from this guy.

Tony Padilla (Christian Navarro)
Yes, Tony did help beat up that one dude with his brothers for some unknown reason, an element that never really came back up in Season 1. But he seems pretty unarguably a force for good otherwise, at least in the lives of people like Clay, Hannah, and her parents.

Olivia Baker (Kate Walsh)
By all accounts in “13 Reasons Why” Season 1, Hannah Baker’s mom Olivia was a pretty damn good parent. Sure, she might not have been as attentive as she could have been, but given the family struggles in trying to keep their pharmacy afloat, she didn’t seem horrible at being there for her daughter.

Andy Baker (Brian d’Arcy James)
Like his wife, Hannah’s dad didn’t seem like he was doing a bad job as a father, apart from focusing his attention on struggling to keep the family business going. It’s hard to blame him for what happened, and the lawsuit he and his wife are fighting really could do Liberty High’s students some good, if it forces some policy changes.

Matt Jensen (Josh Hamilton)
Clay’s dad seems like an okay guy, and probably a decent dad. But the longer the season goes on, the more he seems like he wishes everyone would just get over this whole “girl committed suicide” thing. If everything could just go back to normal, that’d be much more convenient.

Also Read: 30 Streaming TV Shows You Can Binge Watch in a Weekend (Photos)

Clay Jensen (Dylan Minnette)
As the kid who wanted to be Hannah’s boyfriend, Clay wasn’t nearly as big a jerk as everyone else on Hannah’s tapes. But Clay is also guilty of being oblivious at best, and judgmental with Hannah on occasion. For his experiences with the tapes, Clay has changed significantly as a person, at least.

Hannah Baker (Katherine Langford)
Hannah has her sins just like anybody else on the tapes, and she acknowledges that she’s not just a victim in her spiraling high school life, but also a participant. But she’s definitely much more victim, who finds without support, she can’t break free from her depression.

Lainie Jensen (Amy Hargreaves)
Sure, Clay’s mom is a lawyer and doing lawyer things is her job, but the longer Season 1 of “13 Reasons Why” goes on, the more it seems like the right thing to do is drop the case, from a moral standpoint. She’s reluctant to do the things likely required of her to successfully defend Liberty High from the Bakers’ lawsuit — like publicly tarnish Hannah’s name in court — but that doesn’t mean she won’t do them.

Sheri Holland (Ajiona Alexus)
Kids make mistakes, and Sheri made one that contributed to Jeff’s death. She might not have done the right thing right away, despite Hannah’s pushing. But Sheri is a generally good person, and by the end of Season 1, she eventually came around and herself in. Sheri might have screwed up, but she still wants to, and has, done the right thing.

Alex Standall (Miles Heizer)
There might not be anyone on “13 Reasons Why” more repentant for his mistakes in harming Hannah (as well as Jessica) than Alex. That’s not really a good thing, though; Alex becomes self-destructive in dealing with his guilt. But he also actively tries to be better, even sticking up for the slimey Tyler, who definitely doesn’t deserve much pity by the end of the Season 1.

Zach Dempsey (Ross Butler)
One imagines that if Zach wasn’t quite so petty, he’d be a fine dude. But one bad situation with Hannah and he’s spending weeks on end hurting her in what amount to really minor and trivial ways. He’s another of the cool kids who obviously feels bad for what he’s done, but he doesn’t have spine enough to apologize or stand up to the really bad people at Liberty High.

Jessica Davis (Alisha Boe)
It’s true that Jessica was pretty mean to Hannah when they were friends, but the reasons behind Jessica’s betrayal were something of a misunderstanding. Jessica could have tried a harder to be a better friend, that’s for sure — but high school is stupid for everyone.

Mr. Porter (Derek Luke)
Circumstances got the best of Counselor Kevin Porter on the day of Hannah Baker’s death. He had his own problems, and he didn’t do a good-enough job reaching out to her. Where he slips to the dark side is in the aftermath: it certainly seems like he’s doing just about everything he can to cover himself, minimize his impact on Hannah, and generally sweep the whole incident under the rug, rather than learn from it or help anyone who really needs it.

Tyler Down (Devin Druid)
Nerdy Tyler gets bullied a lot, which is not cool. But he also uses his photography skills to creep on young women, because he’s completely gross. The worst things get, the more awful Tyler becomes. Leaving Season 1 on the image that Tyler might become a school shooter suggests he’s not going to do anything to become a better person.

Also Read: 'Dear White People': What It Means and Why

Marcus Cole (Steven Silver)
An upstanding member of the student government, Marcus seems like a nice guy, but the way he treats Hannah suggests he’s on a slippery slope to sexual assault. He’s also a pretty unrepentant jerk after the fact, and pretty receptive to Justin’s “maybe we should murder Clay” suggestion.

Justin Foley (Brandon Flynn)
There are a lot of reasons why Justin does the crappy things he does, but none of them are particularly good. Though he’s genuinely remorseful for the things he’s let happen and struggles with family problems of his own, Justin is the “good man who does nothing” of “13 Reasons Why,” allowing the literal evil that is Bryce to triumph. Oh, and he suggests murdering Clay rather than letting him spill about what happened to Hannah.

Bryce Walker (Justin Prentice)
Unrepentant jerkbag rapist who’s shielded by money, Bryce should be in prison for probably the rest of his life. His attitude suggests the two rapes we know he commits in the show aren’t the only two rapes he’s committed.