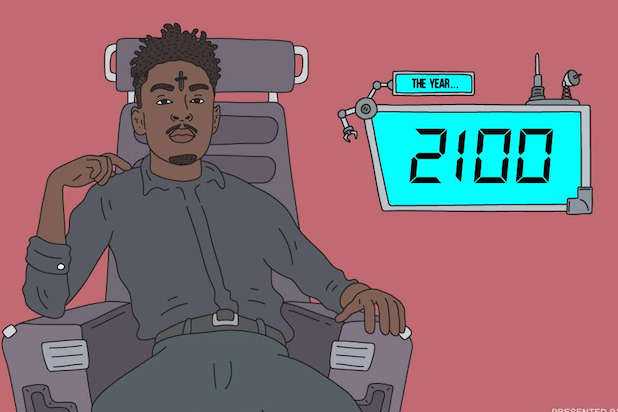 WeBuyGold, a new social video network specializing in short-form video, jumped into the original content game Wednesday with the launch of its animated series, “The Year 2100,” starring Atlanta rapper 21 Savage.

The six-part series features the artist as a super-villain who controls the world with his music — complete with an evil sidekick, Tootie, who dances on a stripper pole inside an Alexa-like speaker. It debuted on WeBuyGold’s Instagram feed, with new episodes airing each week.

“I’m excited to bring this cartoon villain to life and for my fans to see a new side of me,” said 21 Savage in a statement. “The Year 2100 intrigued me as it was the perfect opportunity to combine my music with a new medium and share it with my fans.”

WeBuyGold is the brainchild of Dan Altmann, the 30-year-old wunderkind behind Naritiv, a social company that brings together brands and online creators. A self-professed meme fanatic, Altmann takes pride in having his finger on the pulse of internet culture.

“It makes me happy to find content that my friend group enjoys,” said Altmann, as he thumbed through recent videos and memes he texted, in an interview with TheWrap.

Altmann now wants to leverage his passion for social media into making engaging content and sharing it where millennials and Gen Z will find it.

“We’re tackling media in a way that we consume media, and the way we consume content is through apps,” said Altmann. “It’s all around the world of hip-hop — we feel that fuels culture in a real unique way… [hip-hop] drives mobile culture.”

That’s where DJ Khaled comes in. The producer’s sixth sense for viral social content made him the perfect match as WeBuyGold’s Creative Director.

“He has a magic that he puts behind everything, and nobody really know what that secret sauce is, but it’s there,” said Altmann. “Our hope is to apply that to the different shows and projects he’s a part of.”

As it dives into a fickle market, the trick now for WeBuyGold is to create content that resonates on Instagram. Altmann believes “The Year 2100” can standout through its star power (21 Savage has 3.7 million Insta followers), distinct “Adult Swim”-inspired animation, and its punchy storylines tailor-made for social media.

He also hinted at a DJ Khaled series in the works, so expect to see more original content from your favorite hip-hop artists in the future.