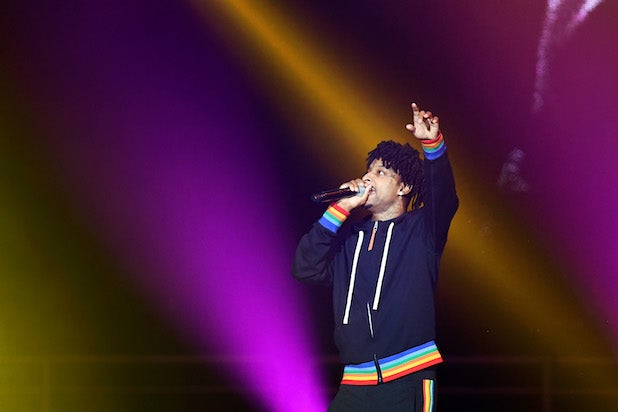 Rapper 21 Savage said he wasn’t bothered by being barely mentioned during the Grammys broadcast last Sunday, saying that he was more stressed about being held by U.S. Immigration and Customs Enforcement rather than the snub.

“I was stressed about getting out. The Grammys is the Grammys, but when you in jail, the Grammys is nothing,” the rapper told The New York Times in an interview on Sunday. “I got to watch it. By that time they had put a TV in my room.”

The rapper, whose real name is She’yaa Bin Abraham-Joseph, was arrested on Feb. 3 by ICE agents on the grounds that he was British and staying in the U.S. on an expired visa. He was then released on bond pending a deportation hearing.

The rapper was also supposed to perform with Post Malone on the Grammys but had to miss the performance following his arrest. Malone wore a t-shirt under his jacket that read “Free 21 Savage,” and “Black Panther” composer and “This is America” collaborator Ludwig Goransson briefly mentioned 21 Savage during his acceptance speech, but that was it.

“He [Malone] wore the 21 Savage shirt, so I felt like I was there. I don’t care what nobody say — everybody in that building who’s connected to this culture, I was on their mind in some type of way. That’s all that mattered,” Savage said. “They didn’t have to say it ’cause everybody knew it. It was in the air. All the people that was there, they said the words in other places and that matter just as much. All the big artists was vocal about the situation, so I was appreciative.”

Savage was also the subject of numerous memes online following his arrest after his fans discovered that the rapper was British. He said he was grateful for the memes and thought some were funny since it was been better than being completely overlooked.

“I coulda been another person who just, “He locked up? Damn,” and nobody said nothing,” Savage said. “But I done been through way worse things in my life than somebody putting me on a meme. I been shot — what is a meme? A meme is nothing. That’s something on the internet that I can do like this [turns over phone] and never see again. I look at bullet scars every day, so it’s like, a meme, bro?”

He finally also said he’s been changed by the experience and feels a “responsibility” to speak up about his circumstances.

Read the full interview via the New York Times here.