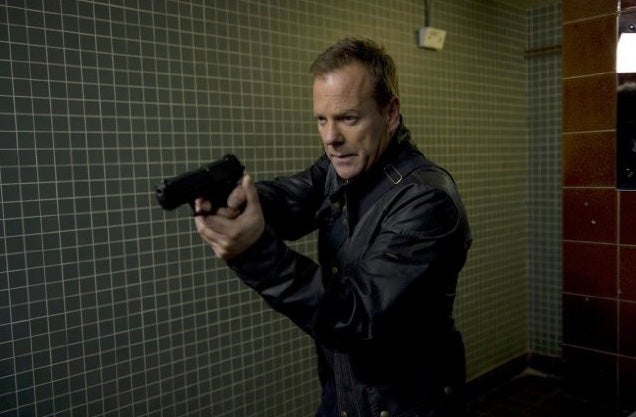 In the four years since we last spotted Jack Bauer, espionage dramas have gotten moodier and shows like “Homeland” and even “The Blacklist” have supplanted “24” in our collective consciousness.

Now Jack’s back in an event series debuting Monday night, and he hasn’t lost his drive or intensity. Once again played by Kiefer Sutherland, he’s a man of action in a double-crossing world with weapons seemingly at everyone’s fingertips.

You won’t see Jack creating figures out of beer cans like “True Detective” icon Rust Cohle, but you will see him body-checking opponents and detonating devices with his wrist. It’s good kinetic fun that makes up for the show’s narrative shorthand.

Much like its protagonist, “24: Live Another Day” wastes no time springing into action. It picks up four years after Season 8 ended, with the same time conceit: Each hour of the show takes place in real time, with lots of cross cutting and split screens. It may seem almost old-fashioned at this point, but it works.

After some establishing scenes at the CIA’s London field office, the agents mobilize. Turns out they’re trying to capture Bauer, a fugitive wanted by U.S. and Russian authorities. Bauer makes an appropriately dramatic reappearance when he stares into a hidden camera before continuing his apparent escape.

Bratt is one of several new characters in the 12-part series, along with CIA agent Kate Morgan (Yvonne Strahovski), who’s leaving the London office after her husband gave secrets to the Russians, and Erik Ritter (Gbenga Akinnagbe, formerly of “The Wire”), the arrogant field operative replacing Morgan.

Morgan, wouldn’t you know, is the first to figure out that Bauer’s re-emergence wasn’t accidental: The fugitive actually wants to rescue Chloe O’Brian (Mary Lynn Rajskub), who helped him get away at end of Season 8, but is now being interrogated on the QT.

In a nod toward modernizing the series, Chloe has been transformed from CIA functionary to a hacker who looks like a character out of “The Girl With the Dragon Tattoo” and leaks government documents like Edward Snowden. Alas, one of her colleagues has more nefarious motives involving drones.

All this activity in London is making the CIA especially nervous given the fact that President James Heller (William Devane) is in town with his daughter Audrey (Kim Raver) to win further drone support. Audrey’s husband Mark (Tate Donovan), chief of staff to the president, is especially antsy given Bauer’s history with Audrey.

One incident of “friendly fire” later, and everyone’s pointing fingers. The threat of assassination is once again in the air in Monday’s two-part premiere.

“24: Live Another Day” does action scenes really well, but the dialogue suffers: It can be overly melodramatic and expository. Sutherland’s Bauer and Rajskub’s Chloe have a nice rapport in their scenes together — she’s peeved he doesn’t treat her as a friend — as do Devane’s faltering president and his daughter. But Strahovski and Akinnagbe are saddled with weak dialogue: He can’t let go of her husband’s betrayal, and she must continually move the plot along.

But hey, “24” doesn’t have time to be subtle or overly moody.

Viewers likely didn’t tune into the original series for that, and they likely won’t do it for this event series. They want to see Jack Bauer kick ass and shout out: “Dammit.”