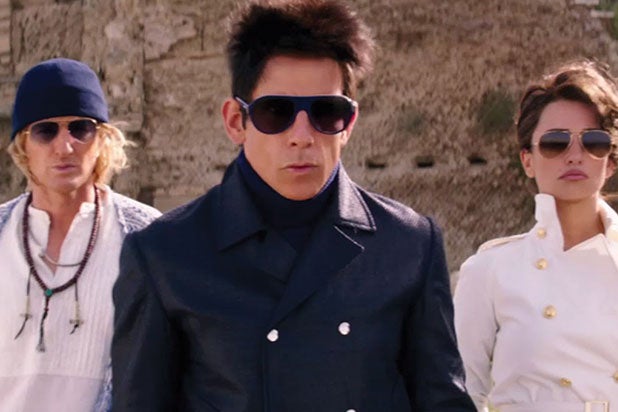 Ben Stiller‘s “Zoolander 2” grossed $16 million over the holiday weekend, coming in far below expectations, partly due to “Deadpool” crippling all competition. But it didn’t help that the movie was reamed by critics and suffered from poor word of mouth.

“Deadpool’s” success was a surprise. It more than doubled initial projections of $65 million to $75 million, with numbers rising as the weekend went on. And “Deadpool’s” climbing success hurt the weekend’s other openers, “Zoolander 2” and “How to Be Single.”

But “Zoolander 2” came in fourth for the weekend, behind the rom-com and “Kung Fu Panda 3,” an animated movie in its third week of release. It had a dismal 22 percent score on Rotten Tomatoes and performed about 30 percent lower than market research projections expected, with tracking at around $23 million for the opening. By that standard, the comedy bombed.

Also Read: 'Zoolander 2' Is a 'Stumble Down the Catwalk' and 8 Other Painful Reviews

“Zoolander 2” grossed $4.2 million Friday, $4.6 million Saturday and $5 million Sunday, amounting to increases of 11 percent and 9 percent, respectively. This means that the movie didn’t suffer a drop at the box office from word of mouth (which was clearly bad with a C+ CinemaScore ) — rather, it was perceived as weak from the outset and never recovered from a very soft start.

Financially, it’s unclear how the story will play out.  The movie cost twice what “Zoolander” did in 2001 – about $50 million, according to the studio – and took in exactly the same amount at its disappointing opening weekend: $16 million.

Zoolander went on to become a staple in pop culture due to its high demand on DVD. The sequel is playing well internationally — opening in the first 20 international markets and making $9.3 million, “Zoolander 2” is grossing 242 percent above “Zoolander 1.”

See below for the five reasons “Zoolander 2” missed the mark:

When “Zoolander 2” and “Deadpool” were slated for the same opening weekend, no one could have foreseen the immense success of the latter.

“No one was thinking, ‘This movie will break every record,'” said comScore senior analyst Paul Dergarabedian. ” You can’t fault the studios for not seeing an outlier six months in advance.”

Opening against a monster film such as “Deadpool” really hurt “Zoolander 2,” as the latter’s demographic was very similar to that of “Deadpool.” Analytics showed that 62 percent of the demographic going to see “Deadpool” were men – the same crowd that would’ve gone to see “Zoolander 2,” had it been on a different weekend.

Moreover, “Deadpool’s” stellar word of mouth veered audiences away from “Zoolander 2” — early reviews for “Deadpool” overshadowed those of “Zoolander,” with an 84 percent score on Rotten Tomatoes, compared to 22 percent, respectively.

“‘Deadpool’ got the lion’s share of the coverage, which really took away any attention on ‘Zoolander 2,'” said Dergarabedian.

“We knew [‘Deadpool’] was there when we set the date, but with that hard R-rating, we thought there would be plenty of room for both of us,” Megan Colligan, Paramount’s head of worldwide marketing and distribution, told TheWrap. “But they went much deeper into teens and women than we or anyone else expected.”

And everyone knows about “Deadpool’s” smashing marketing campaign — something that “Zoolander 2” lacked.

2) “Zoolander 2” Was Too Fashion-Focused

“Zoolander 2” was trying too hard to appeal to the fashion world, promoting the film by having Stiller and Wilson walk the runway, for example, as well as having the entire plot of the movie revolving around the fashion empire.

“Like ‘Entourage,’ the film focused on a business that’s very inaccessible to many people,” added Dergarabedian. “There are very little people involved with the fashion world, and ‘Zoolander 2’ was very specific. The fashion industry is huge, but for an average moviegoer, it’s not within their scope to find it intriguing.”

However, Colligan told TheWrap that the studio was really happy with the marketing campaign, specifically Stiller and Wilson walking in Valentino’s fall 2015 show and a Chanel No. 5 takeoff, with the line, “Nothing attracts like the scent of number two.”

“They were really funny, and Ben and everyone else involved went all-out to make them work, so it’s a little frustrating,” she said.

While “Kung Fu Panda 3” wasn’t the big focus of attention this weekend, it still came in second place with $26 million, ahead of “Zoolander 2” and “How to Be Single.” “Kung Fu Panda 3” appealed to entire families as opposed to just males or just females, and many parents probably wanted to go see a movie with their children on the extended holiday weekend.

4) Too Late! “Zoolander 2” Is a “Generation and a Half Removed” From Its Original

The sequel took 15 years to hit the big screen, so it’s a “generation and a half removed from some of the younger audiences,” said Dergarabedian.

Most fans that actually saw “Zoolander” in theaters in 2001 might not have been interested in seeing a similar film 15 years later — and the film’s current target audience might have been too young to see the first one when it was in theaters. After all, the film became a pop culture phenomenon after it went to home video, which might also become the case with “Zoolander 2.”

Moreover, the selfie-stick jokes and Zoolander pout face that were a staple of the first movie are now something common in our culture — the jokes, claimed many critics, are outdated.

Can “Zoolander 2” really be considered a Valentine’s Day movie? Not really, and neither could “Deadpool,” but “Deadpool” had its stellar marketing campaign working for it, so it didn’t matter whether it was or not. The only somewhat romantic movie was “How to Be Single” this weekend, which drew many females to the theaters and made $20.6 million over the four-day weekend.

But February was never really considered a profitable month, until “Deadpool” surprised everyone, and “it made sense for ‘Zoolander 2’ to open on Valentine’s Day weekend,” added Dergarabedian.