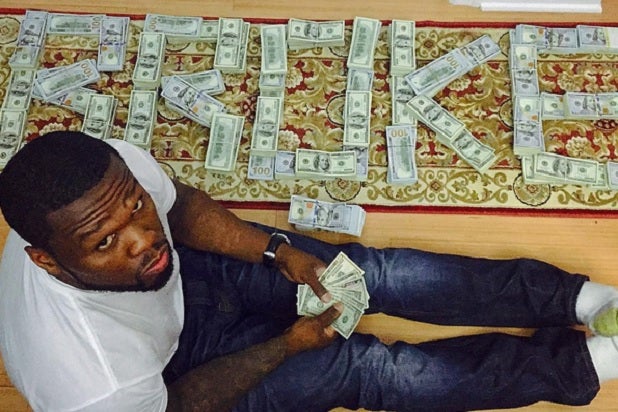 50 Cent might be going through some money issues these days, but at least his sense of humor is rich.

The rapper, who’s currently undergoing bankruptcy proceedings after being ordered to pay $7 million in damages over a sex-tape case, poked fun at his financial situation via Instagram on Tuesday, posing in various humorous posts with serious stacks of cash.

In one video post, 50 Cent (real name: Curtis Jackson) wakes up and yells in alarm that he can’t see his legs — because they’re buried in piles of $100 bills.

Also Read: 50 Cent Testifies That His Flashy Lifestyle Is an Illusion

Another post finds Jackson lounging amid mounds of greenbacks, accompanied by the caption, “OK I found my legs, but I can’t find nothing to watch on TV.”

The rapper also threw a plug to his Starz series, adding, “‘Power’ season 3 on the way.”

A third post found Jackson posing next to stacks of $100 bills spelling out the word “Broke.”

In July, Jackson testified that his flashy lifestyle is largely an illusion, telling a courtroom that, after posing for pictures with flashy vehicles and accessories, “I take the jewelry and the cars back to the stores.”

Cold in my eyes, ashy knuckles…I hustle so hard, I can’t see me legs. LMAO SOUTHSIDE ALL DAY LETS GET IT!!! #EFFENVODKA #FRIGO #SMSAUDIO