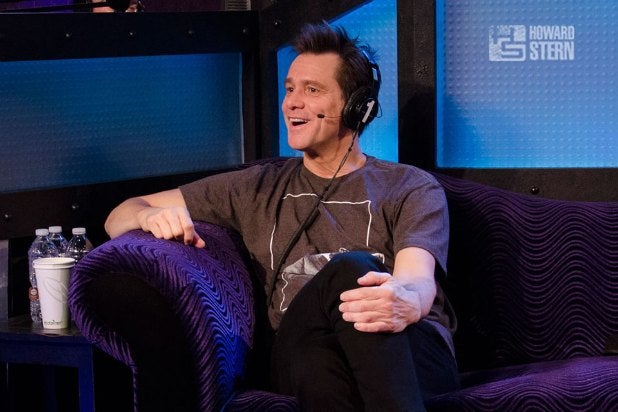 See photos: ‘Saturday Night Live’s’ Not So Colorful Past: A History of Its Diversity

To sit on Stern’s couch can often equate to chugging a gallon of truth serum and Carrey was no exception. The actor and comedian shared stories from both his professional and private lives that left fans stunned.

Here are the seven most shocking items Stern was able to get Carrey to talk about.

While working on the superhero movie “Batman Forever” together, Carrey explained how his co-star Jones told him flat out that he hated him.

“He was a little crusty,” Carrey said. While out at a restaurant, the comedian, who played the Riddler to Jones’ Two Face, approached Tommy’s table to say hello before production on their film had begun.

“He got up, kind of shaking, and hugged me and said, ‘I hate you. I really don’t like you,'” Carrey said. “And I was like, ‘Wow. What’s going on man?’ And he said, ‘I cannot sanction your buffoonery.'”

2. Carrey was dating Linda Ronstadt while living with his parents.

After getting a starring role in the short-lived NBC comedy “The Duck Factory,” Carrey invited his parents to move to Hollywood and live with him. After performing a set at The Comedy Store, he met singer-songwriter Linda Ronstadt and the two became romatically involved for eight months, with his mom and dad under the same roof.

3. Carrey pitched his Matthew McConaughey impression to “SNL” and admits he worried the Oscar-winner would kick his ass.

“Will he kick my ass? There’s always that thought in the back of your mind,” Carrey told Stern.

4. Carrey went on a vision quest in the Mojave Desert.

Seeking spiritual fulfillment, Carrey attended a vision quest with a Native American tribe in the Mojave desert outside of Tucson, Arizona, that included sweat lodges, fasting for four days and being led up a mountain blindfolded. Carrey was left alone at the summit but given a knife to protect himself from cougars.

5. An NBC Page was standing on a ledge at 30 Rock threatening to kill himself when Carrey showed up for his “SNL” audition.

Saying that he believes in signs and listening to the universe, Carrey says that as he showed up for his “Saturday Night Live” audition in the early 80s, there was an NBC Page standing on the ledge of the 30 Rock marquee threatening to jump. He knew then that things would not work out between him and the late-night show.

6. Carrey had trouble tucking himself during the Sia “Chandelier” sketch on “Saturday Night Live.”

Another sketch from his recent appearance on “SNL,” Carrey and cast member Kate McKinnon dressed as the young dancer from Sia’s music video for “Chandelier.”

“The Sia thing, I wasn’t all that nuts about doing in the first place,” Carrey said. “I’m a little pudgy right now. I wasn’t nuts about getting into tights. And I was tucked as much as I could but, it’s hard to hide the python.”

7. Stern and Carrey agree they need to do a movie together.

Telling Stern that he is a huge fan of his movie, “Private Parts,” Carrey told the radio host that he wants to do a movie with him some day. “I’m ready to do it, let’s go!” Stern said.

Listen to a clip of Carrey interview below.