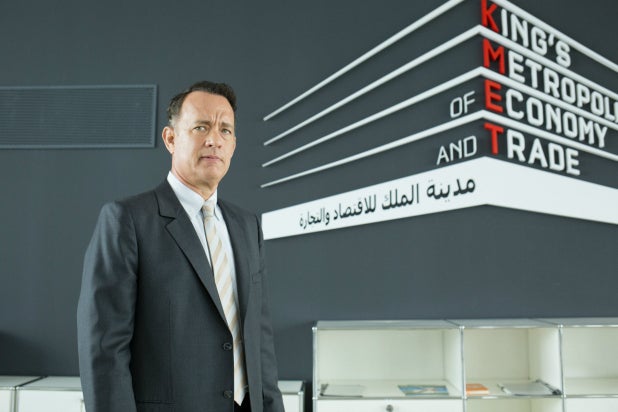 “A Hologram for the King” is never so alive or compelling as it is in its opening sequence, an out-of-nowhere rendition of Talking Heads’ “Once in a Lifetime” with Tom Hanks in the role of David Byrne. Presented like a music video, with Hanks on a roller coaster one moment and dozing off on an international flight in the next, it lasts all of a minute before abruptly cutting out, never to be mentioned again.

It’s a bravura introduction to writer-director Tom Tykwer‘s adaptation of the Dave Eggers novel of the same name, with Alan Clay (Hanks) presumably repeating the song’s famous refrain in his head time and again: “How did I get here?”

“Here” in this case is Jeddah, Saudi Arabia, where the downtrodden businessman is seen flying in that opening cutaway. What awaits him upon arrival? The usual: Kafkaesque bureaucracy and colorful characters. Alan is the team leader for a corporation pitching a three-dimensional IT system to the King, who’s contriving to build a pre-planned city on a swath of undeveloped desert. Alan and his three faceless underlings are confined to a tent with nonexistent wi-fi and unreliable air conditioning; a stone’s throw away is a brand-new skyscraper housing the regime’s upper brass.

After the third consecutive day of being told that neither the king nor his on-site contact are actually there, Alan’s business trip seems poised to devolve into “Waiting for Godot”-style absurdity. He hasn’t booked a return flight, and the longer he’s holed up in his hotel the less he wants to be there. The entire presentation for which the film is named ends up being something of a MacGuffin, of course — Alan is here to do a hard reset and get his life together, not that he consciously realizes it yet.

Also Read: Review: A Smart, Sexy Movie About Grown-Ups? '3' Is the Magic Number

Movies about well-to-do white people trekking to the Middle East tend to require trigger warnings these days, and the Saudi Arabia of “A Hologram for the King” is indeed another foreign land whose main narrative purpose is to help a white dude find himself. Hanks is in his third decade as our official American everyman, and it’s largely thanks to his delivery that most of the fish-out-of-water gags are at his expense rather than the locals’. His habit of breaking every chair he sits in, for instance, feels more like a cosmic joke being played on him than a sign of poor craftsmanship. 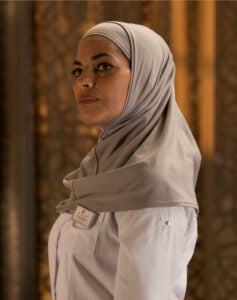 The film is at its best when downplaying this stranger-in-a-strange-land element in favor of Alan’s bizarre ennui, which could have just as easily afflicted him in New York as in Jeddah. He has a mysterious, anxiety-inducing lump the size of a golf ball on his back that serves as a blatant symbol of his deep-seated malaise: Having such a hard time paying your daughter’s college tuition that you’re forced to take a job halfway around the world? Better get that growth checked out.

When he finally does, he meets the film’s most important supporting character: beautiful doctor Zahra (Sarita Choudhury, “Homeland”), whose bedside manner does as much as her medical expertise to raise Alan’s spirits. By her very nature, she’s the kind of character who refuses to be condescended to or exoticized. The same isn’t quite true of Yousef (newcomer Alexander Black), the affable cabbie who thinks the husband of a woman he’s been texting wants to wire his car to explode, loves Chicago (the band, not the city), and is constantly getting our hero out of a jam. (In one of the film’s funnier running jokes, Alan literally never wakes up in time for the shuttle service at his hotel.) Yousef is a familiar archetype, but Black’s good-natured charm steals a few scenes nevertheless.

Even when “A Hologram for a King” rests on shaky narrative ground (which is often), Tykwer’s confidently frenetic presentation and a host of surreal grace notes lend it a sense of urgency that keeps us on our toes, if not the edge of our seats. Momentary cutaways to key moments from Alan’s past (laying off the workers from the Schwinn factory he used to run, signing divorce papers) are jarring but also somehow seamless, hitting us with the same unexpected force as a half-awake memory.

Like Alan, you’re likely to wonder how you got here at times and why so little of this seems to follow logically; most of these disparate elements, though funny or otherwise engaging on their own, feel out of step with one another. “A Hologram for the King” succeeds at putting us in Alan’s meandering headspace, but that doesn’t mean you’ll find his journey as meaningful as he does.