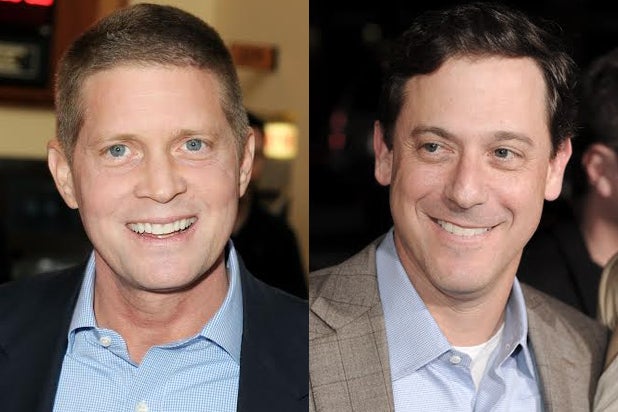 Former Universal Pictures chairman Adam Fogelson will be named chairman of the Motion Picture Group for the new, next generation film and television studio being led by Robert Simonds, the company announced Wednesday.

Fogelson, who most recently led Universal Pictures to three of the most successful years in that studio’s history, will oversee all aspects of the motion picture group for Simonds’ new studio, including its production, marketing, distribution and home entertainment strategy.

The studio is currently ramping up to finance and self-release up to 10 major motion pictures a year, primarily in the $20-$60 million budget range.

“This is a monumental moment for our new company. Adam chose us over other extremely compelling offers because he recognizes the once-in-a-generation opportunity to build a modern, multi-media entertainment company from the ground up. The creation of a new major studio has not been accomplished in nearly two decades,” said Simonds, who called Fogelson “one of the most exceptional executives I have ever met. What Adam did at Universal was amazing. Now he brings a major infusion of talent, experience and taste to a studio that is quickly being defined by the breadth and strength of its executive bench.”

Earlier this month, the studio recruited former Disney production and marketing chief Oren Aviv as its president and chief content officer of the Motion Picture Group.

“With the shifts, opportunities and challenges that are taking place in the entertainment industry, we get the rare chance to reimagine how a contemporary studio should operate, taking full advantage of the lessons learned from the trenches,” said Fogelson. “I couldn’t be more excited to be working with Bob, who is a true innovator and a brilliant entrepreneur, and Oren, whose breadth and depth of success make him a very valuable asset to the company. We have assembled some of the sharpest minds in the industry and we will be dedicated to optimizing the way we approach everything from overhead and studio administration to production, marketing and distribution decisions. We’re backed by a board and shareholders with tremendous vision and resources. The opportunity here is striking.”

“Adam and I have talked about working together for a long time, and I’m thrilled that he will be leading us as we launch our first slate and grow our incredible new studio,” added Aviv. “The kinds of films he championed at Universal are the kinds of movies we seek to make. His hire is a true coup for our company.”

Fogelson is the latest high-profile hire for the new studio, which also includes a Board of Directors with many prominent players in the world of global finance and entertainment such as Frank Biondi, former President and CEO of Viacom and former chairman and CEO of Universal Studios; Tony Vinciquerra, former Chairman and CEO of Fox Networks Group; film and stage producer, businesswoman and filmmaker Gigi Pritzker (“Drive”); David Bonderman, founding partner of TPG; Bill McGlashan, managing partner and founder of TPG Growth; and John Zhao, CEO of Hony Capital, one of China’s largest and most respected private equity firms.

After formally launching just four months ago, the studio has already scored its first major television production commitment with NBC’s recent primetime pick-up of the drama series “State of Affairs,” starring Katherine Heigl.  The show will debut this November.

From 2009 through October of last year, Fogelson served as chairman of Universal Pictures. While at the company, he oversaw worldwide operations for the motion picture group, including its global theatrical, home entertainment, partnerships & licensing, finance, human resources and communications divisions.

In 2012 and again in 2013, under Fogelson’s leadership, Universal celebrated its highest grossing years at the worldwide box office in the company’s 100+ year history. During his tenure as Chairman, Universal released numerous hit films including “Ted,” “Bridesmaids,” “Snow White and the Huntsman,” “Identity Thief,” “Pitch Perfect,” “Mama,” “The Purge,” “Les Misérables,” “Despicable Me 1 and 2,” and “Fast and Furious 5 and 6.” Other greenlit films while Fogelson was chairman include “Best Man Holiday,” “Lone Survivor,” “Ride Along,” “Non-Stop,” “Neighbors,” “The Purge 2” and “Lucy.”

Fogelson joined Universal in 1998, beginning as VP of creative advertising and rising to president of marketing and distribution in 2007. During his time in Universal’s marketing operations, Fogelson worked on all the films in the “Meet the Parents,” “Bourne,” “American Pie” and “The Fast and the Furious” franchises, along with other box office successes including “Mamma Mia!,” “American Gangster,” “Knocked Up,” “Bruce Almighty,” “Seabiscuit,” “The 40-Year-Old Virgin,” “8 Mile,” “The Break-Up,” “Erin Brockovich,” “Notting Hill,” “Bring It On” and “Ray.”

Fogelson’s work on 2008’s diverse and highly successful film slate earned him recognition from Advertising Age as 2009’s Entertainment Marketer of the Year.

Prior to Universal, Fogelson was senior VP of worldwide marketing for Trimark Pictures. He also previously served as VP of the AFA Company, a consulting firm focusing on production marketing and distribution, where his clients included Carolco Pictures and Nelson Entertainment.