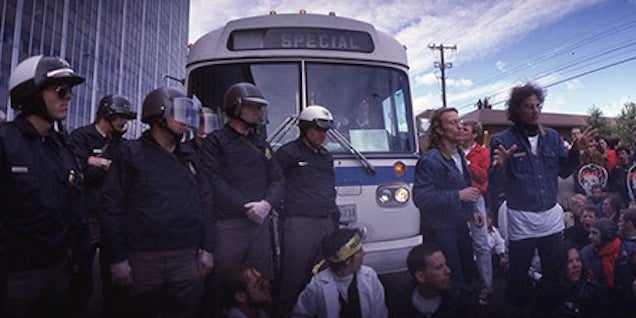 David France has been a top investigative reporter for decades, covering everything from the sex-abuse scandal in the Catholic Church to the struggles of war veterans for the likes of Newsweek and New York magazine. But at age 53 he embarked on a second career as a first-time filmmaker.

“I was a frustrated still-life photographer,” France said, admitting that he’d barely even picked up a movie camera before embarking on the Oscar-nominated documentary "How to Survive a Plague."

The film chronicles the birth and growth of AIDS Coalition to Unleash Power and its offshoot, Treatment Action Group, as well as the lasting accomplishments of its members; activist men and women — most of them gay, many of them infected or sick — whose refusal to accept governmental and societal indifference helped turn the tide against the AIDS epidemic.

France fell into filmmaking because he was concerned that a younger generation was largely unaware of the devastation AIDS had wrought, as well as the courageous response by many gay men and women to the death that surrounded them.

“There were all these heroics that people had no idea about that I wanted to enshrine for history,” France told TheWrap. “I wanted to capture that time. It was death, and it was sexy. It was tragic and full of a gallows humor. It was a battle for life, and so life itself was defined in a Technicolor way.”

It was a story with which he was intimately familiar. As a reporter, France had covered the work of ACT UP and TAG and observed as members transformed themselves into medical, lobbying and media experts in order to force the pharmaceutical industry, the National Institutes of Health, the Food and Drug Administration and the media to take notice of and respond to a health crisis which was spiraling out of control.

When his research unearthed a rich archive of footage from that time both in private hands and at the New York Public Library, France decided film would be the most effective medium to capture the fight. He pounded the pavement to try to persuade activists who survived those plague years and the families of those who were less fortunate to share their films. It was a tough sell.

“It was a terrible time that they sealed away in their attics,” France said. “Those people who had survived had really struggled to put that all behind them and live an ordinary life. They had a lot of resistance to revisiting all that again.”

France said the reception from the family members and surviving activists who have seen the film has been gratifying. He’s most heartened by the response from Sara Rafsky, daughter of the late AIDS activist Bob Rafsky. Her father’s encounter with Bill Clinton at a 1992 fundraiser, during which he demanded the candidate do more for people with AIDS, elicited Clinton’s famous “I feel your pain” line and provides one of the film’s most memorable moments.

“She was 8 when her father got sick, and she’s in her mid-20s now, and she told me that through the process of this film she’s gotten to know her dad,” France said. “She now has a relationship with him that she didn’t have all those years after he died. I’m proud to reanimate her father for her.”