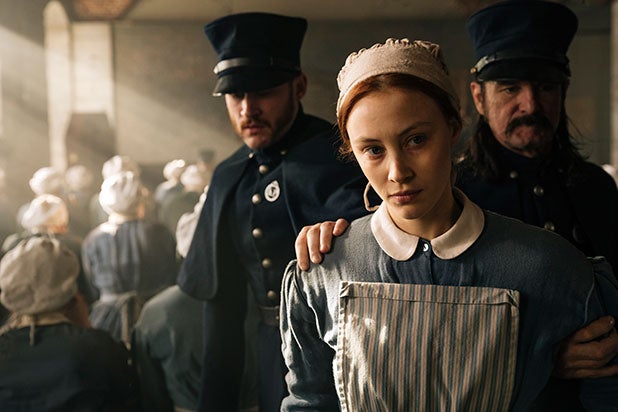 Hulu’s “The Handmaid’s Tale” basically screamed in giant red letters, “THIS IS ABOUT TODAY! THIS IS HAPPENING NOW!” So it’s no wonder Margaret Atwood’s vision of dystopia resonated so strongly.

“Alias Grace,” Netflix’s new miniseries based on an Atwood novel, is more subtle than its Hulu counterpart,  but still deserves your close attention.

“How can I be all these different things at once,” Grace asks in the show’s opening monologue, and “Alias Grace” can be as light-hearted and pleasant a story as it is a probing, surreal and melodramatic character study.

“The Handmaid’s Tale” is a modern-day dystopia with shadings from the 19th Century, but “Alias Grace” is actually set there. Director Mary Harron and writer Sarah Polley manage to make 1850s Toronto a different sort of dystopia for women.

The newspapers refer to Grace Marks (Sarah Gadon) as a “celebrated murderess,” an Irish immigrant in Toronto incarcerated for 15 years after being convicted of murder. Now gossips gawk at her as she does housework, or quack doctors in an asylum strap her into bizarre contraptions to study her.

Grace gets some relief when she’s visited by Dr. Simon Jordan (Edward Holcroft), a handsome and nurturing American psychologist brought in to analyze her with the hopes of proving her innocence. But as she recounts her life story, we gradually doubt Grace’s sanity, her memory and her honesty. Is she an amnesiac or a calculating maniac? We’re never sure.

The quick, combative exchanges between Grace and Dr. Jordan are like gender-flipped scenes from “Silence of the Lambs.” Harron conveys jumps in Grace’s memory with snappy editing, and Polley’s dialogue sparks with talk of politics, feminism, economic inequality and more all conveyed in clever, period-appropriate idioms. “Men such as yourselves do not know the messes you make,” Grace says at one point.

There’s even a subtle love triangle and Harron uncovers sex in her Puritanical setting. As a director, she has a gift with taking the drama through some surprising turns. “Alias Grace” will make you crack a smile amid tragedy, or it’ll startle with how it builds the tension and danger in Atwood’s story. Further, Atwood’s ideas about Grace’s psychology grow into a spiritual, even supernatural parable about how men see what they want in women, and fail to understand them. The ultimate story is sure to polarize.

Anna Paquin, as a caretaker, manages to change her face quickly from sunny and welcoming to pale and sickly, and her personality erratically flits between friendly and spiteful. But her multi-faceted performance takes a backseat to a shocking one by Gadon.

“The Handmaid’s Tale” was great bingeing material because it was so bold, punishing and shocking. “Alias Grace” takes a slower burn, but its payoff is just as good.