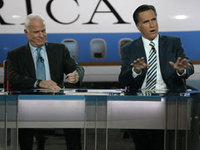 The Ronald Reagan Presidential Library sits nestled at the edge of a breathtaking ridge of verdant mountains in Simi Valley. You can see them through the main hall of the building, where an actual Air Force One Jet occupies the center of the room, on display before a wall of panelled glass. At last night’s debate, the four remaining Republican candidates were perched on a stage with the glass behind them on one side, and the airplane behind them on the other. (You can count them generously as three and a half, since neither Mike Huckabee nor Ron Paul seem to count as an actual whole.) Rudy Giuliani came by to throw his support to John McCain after having withdrawn from the race, and Ron Paul supporters practically stopped traffic at the entrance to the library. Nancy Reagan wore red, o’ course. It was a staid affair, in all, until it got to Iraq. Then McCain went straight for Mitt Romney’s kidneys, contrasting Romney’s lack of experience in national security with his own career. They got in an acrimonious back and forth over whether Romney had called for a timetable for withdrawal from Iraq, but McCain really ended the conversation when he said: "I am raising the question of whether you have the experience and judgement to lead this country in a time of war, and I’ll continue to raise it. I’ve raised it many times." Ouch. On the other hand, the questioners – Janet Hook of the L.A. Times and Anderson Cooper of CNN – got McCain to admit that he wouldn’t vote for his own immigration bill, were it to come to the floor today. Well done.