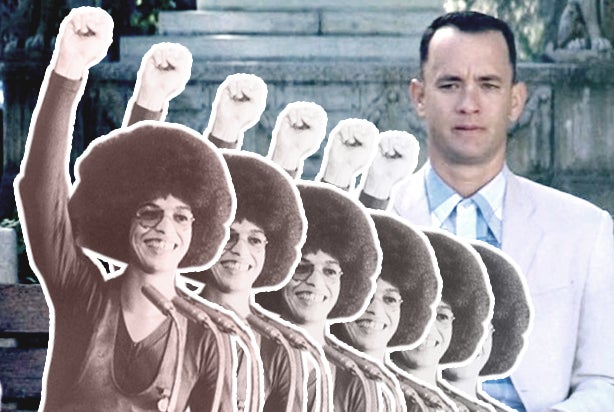 Angela Davis was a Black revolutionary professor when California Gov. Ronald Reagan fired her from UCLA in 1969 — and catapulted her onto the national stage.

The next year, she became the third woman to join the FBI’s Most Wanted List, accused of a plot to free a prisoner she loved. She’s been celebrated in documentaries like “The Black Power Mixtape” and Ava DuVernay’s “13th.” But we think she deserves to be the subject of a “Forrest Gump”-style biopic, one that would sweep from the dawn of the Civil Rights Movement to the rise of Black Power nationalism.

We discuss why on the latest “Shoot This Now” podcast, available on Apple or Spotify or right here:

If you’ve never heard of Davis, you’re not alone. But you’re probably not from California. Davis is a symbol of revolutionary California when everything seemed possible in the Golden State.

Like Gump, she appears at crucial moments in Baby Boomer history.

She grew up in Alabama during bombings by segregationists, trying to drive African-Americans out of middle-class neighborhoods. Her neighborhood was targeted so ferociously that they called it “Dynamite Hill.” She grew up next to one of the four little girls killed in the Ku Klux Klan’s bombing of a Black church in 1963.

She went to high school in the Manhattan in the early 1960s, and studied in Berlin during the days of the Berlin Wall.

Her time in California came during the rise of the Black Panthers — and Ronald Reagan.

When she was imprisoned, John Lennon and Yoko Ono and The Rolling Stones* wrote songs about her. Aretha Franklin offered to pay her bail.

But she is also the opposite of Gump: an intellectual African-American woman determined to control her own fate.

She’s a hero of the left, but why isn’t she more famous? Perhaps her arrest and trial may suppressed her message and the legacy she deserves. In the podcast, we talk about how Reagan and President Nixon tried to paint her as a threat to society — and we end with her resistance against President Trump.

As we do every week, we also talk about our dream cast in the event that this movie is ever made. A few of the names that come up include Susan Kelechi Watson (“This Is Us”), Zazie Beetz (“Atlanta” and Deadpool 2”) and Jussie Smollett (“Empire”).

If you like our little podcast, feel free to review us on iTunes, or tell someone you like about it. You can also listen to our past episodes here.

*The Stones’ song is really not great. The Lennon-Ono song is better.