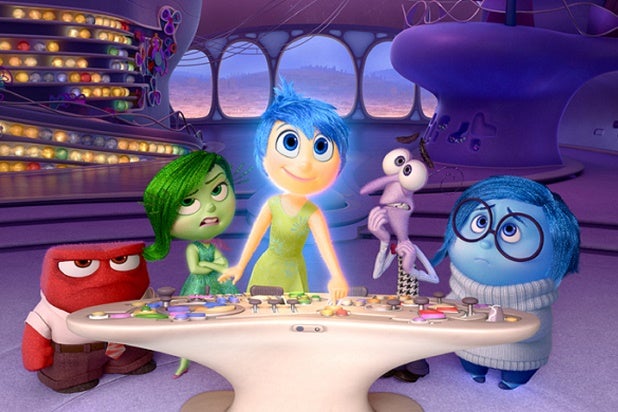 Pixar’s “Inside Out” cleaned up at the 43rd Annual Annie Awards on Saturday in Los Angeles, claiming the top prize of best animated feature, best director for Pete Docter and best voice acting for Phyllis Smith, among others.

The Oscar-nominated film won 10 awards overall, sweeping almost all the animated-feature categories. The only category in which it was beaten was Animated Effects in an Animated Production, which went to its fellow Pixar film “The Good Dinosaur.”

The 10 Annies tied the record shared by a number of films, including Pixar’s “The Incredibles” and DreamWorks Animation’s “How to Train Your Dragon” and “Kung Fu Panda.”

In the new category of Best Animated Feature – Independent, the hand-drawn Brazilian film “Boy and the World” beat a field that included “When Marnie Was There.” Both films are Oscar nominees, along with “Inside Out,” “Anomalisa” and “Shaun the Sheep Movie.”

“He Named Me Malala” took Best Animated Specialty Production, and awards heavyweight “The Revenant” earned a trophy for best character animation in a live-action film, for the CG bear that attacks Leonardo DiCaprio in the film’s signature scene.

Don Hertzfeld’s “World of Tomorrow,” an Oscar nominee in the animated-short category, won the Annie for short film.

“I did watch the Republican debate, and this evening is far less cartoony,” he told a crowd that included actors Rita Moreno, Edward James Olmos and Rita Moreno.

In the other television categories, the only shows to win more than one award were “Disney Mickey Mouse,” which won three, and “Bob’s Burgers,” which won two.

The Annie Awards are presented by the Los Angeles branch of the International Animated Film Association, ASIFA-Hollywood. After 20 years of handing out honorary and lifetime-achievement awards, the group has been giving awards to individual films every year since 1992.

In the 14 years that the Academy has been handing out an award for animated feature, the Annie winner has gone on to take the Oscar nine times.

Best Animated Special Production
“Elf: Buddy’s Musical Christmas”
“He Named Me Malala” *WINNER
“I Am A Witness”
“Kite”
“Kurt Cobain: Montage of Heck”
“Niko and the Sword of Light”

Best Animated Television/Broadcast Commercial
“Chex Party Mix: “Holiday Magic”
“Man and Dog” *WINNER
“Michelin Total Performance: All the Performances In Every Tire”
“We Are All Farmers”

Also Read: #OscarsSoWhite Again? Here's How Diverse Next Year's Awards Could Be

Animated Effects in an Animated Production
“Home”
“Hotel Transylvania 2”
“Inside Out”
“Minions”
“The Good Dinosaur” *WINNER
“The SpongeBob Movie: Sponge Out of Water”

Production Design in an Animated Television / Broadcast Production
“Dawn of the Croods”
Episode: “Garden of Eaten”

Storyboarding in an Animated Television / Broadcast Production
“Adventure Time”
“Dragons: Race to the Edge”
“Niko and the Sword of Light”
“Steven Universe”
“The Adventures of Puss in Boots”
“Disney Mickey Mouse” *WINNER
“Wander Over Yonder”
“We Bare Bears”