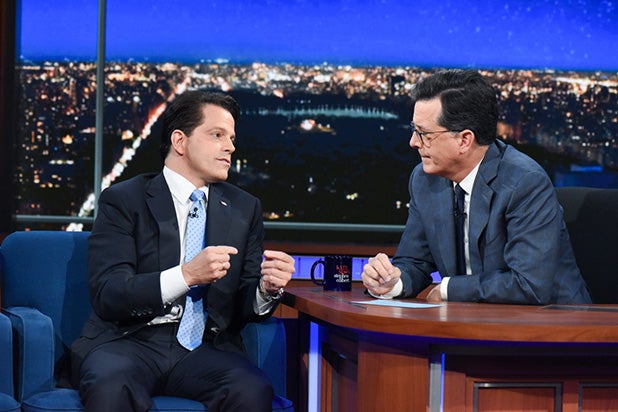 Anthony Scaramucci’s tenure as White House communications director was short-lived, but it was marked by multiple hostile relationships, personal strife and one instantly iconic photo with Reince Priebus.

During one of Scaramucci’s 10 days on the job, he famously battled with then-chief of staff Reince Priebus. Wall Street Journal photographer T.J. Kirkpatrick captured their adversarial relationship in a stunning photo of the two locking eyes while standing in the Oval Office.

“That’s a rough photo,” Scaramucci admitted in an interview on CBS’s “The Late Show With Stephen Colbert” on Monday.

Though Preibus was ousted just days after Scaramucci stepped into his role at the White House, he stopped short of saying that he came in with the intention of cleaning house.

“I don’t want to say it that way,” Scaramucci told Colbert. “[But] there was no love lost there, obviously.”

Also Read: Just Before He Was Fired, Scaramucci Was Tricked by a Prankster Pretending to Be Reince Priebus

Colbert also needled Scaramucci on his comments on chief strategist Steve Bannon, getting the now-former Trump administration official to admit that he believes Bannon to be the source of the White House’s leaks to the media.

TONIGHT: Anthony #TheMooch @Scaramucci is here and he's revealing who he would front-stab if he was still in the White House. #LSSC pic.twitter.com/sEljprdlH1