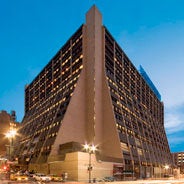 The Associated Press laid off dozens of guild-covered workers Tuesday, and employees there fear that more cuts are around the corner.

The AP refused to disclose the number of layoffs, but employees estimate that as many as 90 people were let go globally, including veteran national writers.

With cuts in editorial departments across the news cooperative’s global footprint, the AP is making good on its vow to reduce its payroll by 10 percent in 2009. It offered voluntary retirement packages to veteran employees earlier this year, but was unable to meet its goal through those buyouts and attrition.

Employees at the AP described a dire scene at its headquarters (at 450 W. 33rd St. in Manhattan, above left) on Tuesday as everyone from editorial assistants to key supervisors was told they no longer had jobs. They included all remnants of the once-powerful national news desk, which was dismantled as the cooperative went ahead with its plan to create four regional news hubs over the past two years.

The nonprofit corporation, which is owned and controlled by the U.S. newspapers on its board, has been busily restructuring as it slashes rates to its print subscribers and scrambles to find new revenue streams with online and television clients.