Former astronaut Charlie Duke is one of only 12 people ever to set foot on the moon, and he is now bringing that experience to millions as ambassador of the upcoming live show “Apollo 11 – An Immersive 360° Adventure.”

Premiering at the Rose Bowl in Pasadena, California, on July 5, the show’s launch ties in the with the 50th anniversary of Neil Armstrong and Buzz Aldrin’s first lunar landing on July 20, 1969.

Duke served as capsule communicator in NASA’s Mission Control for that historic mission, and went on to become the youngest person to visit the moon on Apollo 16 in April 1972 when he was just 36.

“There was a feeling of adventure, wonder, excitement  … all of these emotions roll into one as you stand on the moon,” Duke, now 83, told TheWrap. “It was the most incredible experience to see this landscape for the very first time knowing that no one has ever been on that spot before,” he said, referring to the fifth manned lunar landing mission when he visited the moon’s Descartes region with fellow astronauts John Young and Kevin Mattingly.

“Every time we went over a ridge or looked into a crater we wondered, ‘What are we going to see now?’ We were so excited and having so much fun, we didn’t want to come back. I could have been number 10,000th person up there and it wouldn’t have dampened my enthusiasm at all,” he added. 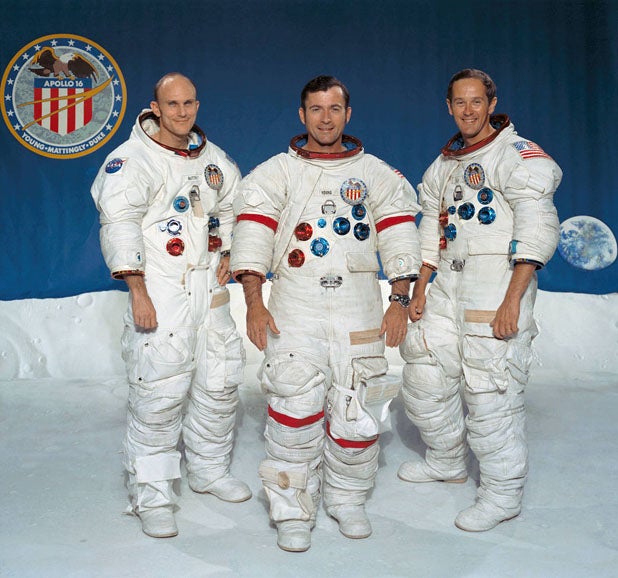 Duke (above right) is hoping that kind of excitement is felt by audiences in the 1,600-capacity lunar dome during the performances of “Apollo 11,” which boasts 40,000 square feet of 360-degree video projection.

Written by Todd Kreidler and directed by Scott Faris, “Apollo 11 – An Immersive 360° Adventure” is seen through the eyes of a character who was at Mission Control in 1969 and is now telling his granddaughter about the history of the first landing.

“I see it as a way to encourage young people to get them involved and excited about space again … encourage them to dream about going to Mars. It is going to be very exciting, very entertaining and very educational,” Duke explained. “In 2017, NASA said they needed more astronauts and put out a call and had 18,000 applications for 12 positions so there’s obviously still a lot of interest in space exploration,” he added, predicting that one day we will have “space tourists” and a permanent space station on the moon for scientific exploration.

While NASA’s Insight mission to Mars and privately funded rocket launches by companies like SpaceX have added fuel to space fever, Hollywood had its sights set on the stars last year with “First Man,” starring Ryan Gosling and Claire Foy as Neil and Jan Armstrong.

Duke took exception to the film’s portrayal of Armstrong. “I liked the story line but they depicted Neil as too solemn and quiet. He wasn’t like that at all …  he was very focused but very friendly too,” Duke told TheWrap. “I think they portrayed him and Jan as more serious than I knew them.

“I got a little sad as it was not like that in real life. You look at the photos after splashdown and Jan is all smiles, then while Neil and Buzz while they were in quarantine were just grinning ear to ear because they were so excited about what they had done. I don’t think they captured that in the film,” Duke added.

For those wanting a more authentic and immersive portrayal of all the moon landings from July 1969 until December 1972, “Apollo 11 – An Immersive 360° Adventure’s” begins its 18-city tour in Los Angeles on July 5. Click here for more details and ticket information.

Watch a preview of the show below.