Multi-tasking, the abilty to easilty switch between email clients and new opportunities for advertisers are just some of the major features of a new iPhone operating system unveiled by Apple on Thursday.

During a presentation at its Cupertino, California, campus, Apple chief Steve Jobs gave tech reporters a "sneak peek of the next generation of iPhone OS software," one that he said will change the way customers use the iPhone. 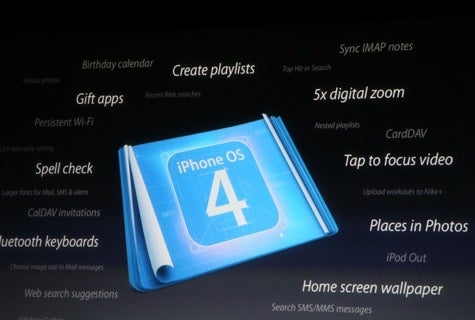 There will be more than 100 new user features included in the new iPhone OS, Jobs said. But the biggest innovation is multitasking, which will allow users to run multiple applications at once — something previous iPhone operating systems sorely lacked.

“We weren’t the first to this party,” Jobs said. “But we’re going to be the best.”

Double-clicking the Home button brings up a screen of all applications running on the phone. Jobs demonstrated by switching back and forth from games to email and web browsing.

Some other key new features:

– Folders for apps, and the ability for apps that open where users left them

– Unified inboxes for multiple mail accounts, with the ability to more easily switch between email clients

– Custom backgrounds that are persistent throughout, rather than just on the lockscreen

– An iBookstore — which launched with the iPad

"We have a lot of free or reasonably priced apps," Jobs said. "We like that, but our developers have to find ways to make money. So [they] are putting ads into apps, and for lack of a better way to say it, we think most of this kind of advertising sucks."

Search is not happening on phones, Jobs said. "People are using apps — this is where the opportunity is to deliver advertising is."

Jobs said the company could offer the ability for mobile ads to be inserted into apps without "yanking" you away from them.

Apple is going to sell and host the ads, Jobs said, and give developers a 60/40 split of the revenue.

"You know the ads on the web — they’re eye catching and interactive, but they don’t deliver emotion," Jobs added. "What we want to do with iAds is deliver interaction and emotion.

The Apple chief also said the company was also able to make the upgrades without losing battery life, another common gripe among iPhone users.

It’s been a big week for Apple. On Monday, the company announced that it sold more than 300,000 iPads in the U.S. on Saturday, the first day they were available to the buying public.

On Thursday, Jobs said that the company had sold more than 450,000 iPads to date.

More Than 300,000 iPads Sold on Day 1
Why the iPad Won’t Be a Media Savior
Look Who’s Jumping on the iPad Bandwagon