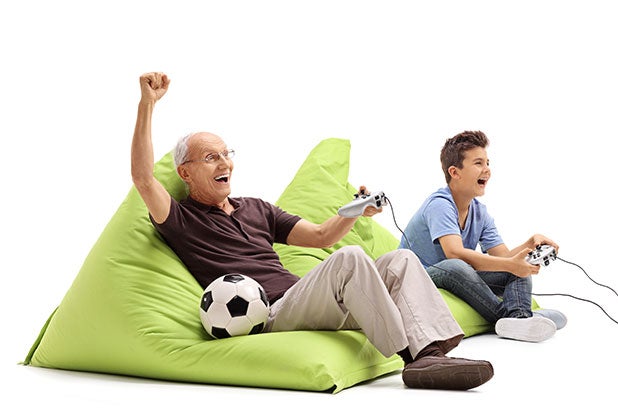 In our last post, we described the size of the eSports market, made the case that eSports could become the next UFC and emphasized that traditional media companies need to be active players in the market. 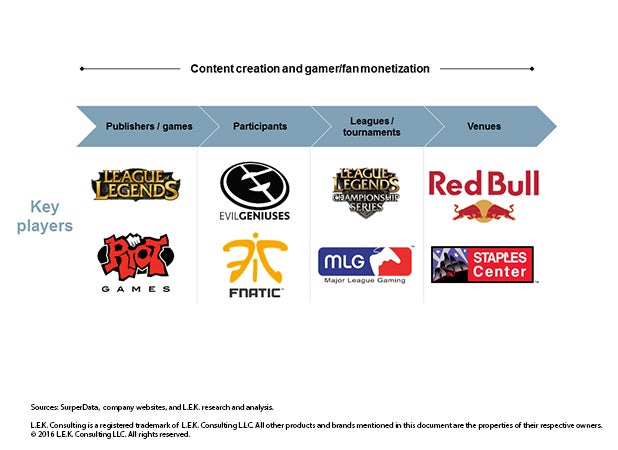 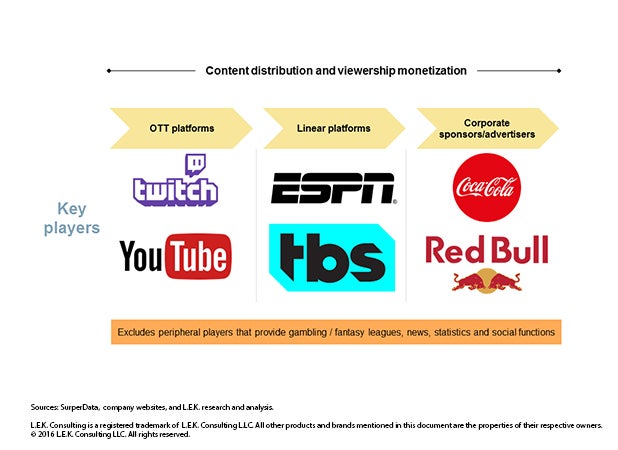 The first set of value chain players focus on developing the content that makes eSports so compelling.

These include the video game publishers themselves, who produce the video games in which gamers play and compete and earn revenue primarily through in-game micro-transactions (e.g., virtual goods). Publishers range from eSports pure plays, such as Riot Games, which makes the popular League of Legends, to more traditional publishers, such as Activision and EA, which have eSports titles.

Next, we have participants, which include not only viewements but also professional players and teams that compete in leagues and tournaments. These players earn money from competitions and from endorsements from third-party advertisers.

We then have the leagues themselves, such as Major League Gaming, which host online and off-line tournaments. Their revenue streams include sponsorships, membership fees, merchandise and tickets. Some also obtain revenue through real-money gaming around the eSports tournaments themselves.

Additionally, major venues that host traditional sporting events also host eSports events. For example, the Staples Center has hosted the League of Legends World Championship and the Mandalay Bay Events Center has hosted the North American League of Legends Championship Series. Some publishers, including Riot, even have their own eSports mini-arenas.

The second group of organizations participating in eSports focus on distributing content and monetizing viewership.

Over-the-top (OTT) online video platforms, the best known of which is Twitch, facilitate the live streaming of games and tournaments. These platforms also enable amateurs to live-stream their video gaming and other activities.

Traditional linear platforms such as ESPN and TBS are now airing eSports events and related content.

Finally, corporate sponsors and advertisers like Coca-Cola and Bud Light are increasingly turning to eSports, recognizing its value as a sponsorship platform. They pay teams, league organizers, publishers, platforms and other value chain participants for logo placement, products, naming rights and ads, among other forms of sponsorship and advertising.

Beyond the value chain players is an emerging set of peripheral players that provide functions and services related to eSports and viewing platforms (e.g., gambling/fantasy leagues, news, statistics, social opportunities).

In addition to the value chain itself, traditional media companies not only need to understand the eSports value chain but also emselves. The most popular eSports games differ greatly in their gameplay and visual appeal.

Let’s first start with multi-player online battle arena (MOBA) games, which are a staple of eSports. In MOBA games, teams vie to complete an objective, such as destroy the other team’s base. Riot Games’ League of Legends is the most noteworthy MOBA (see figure below). 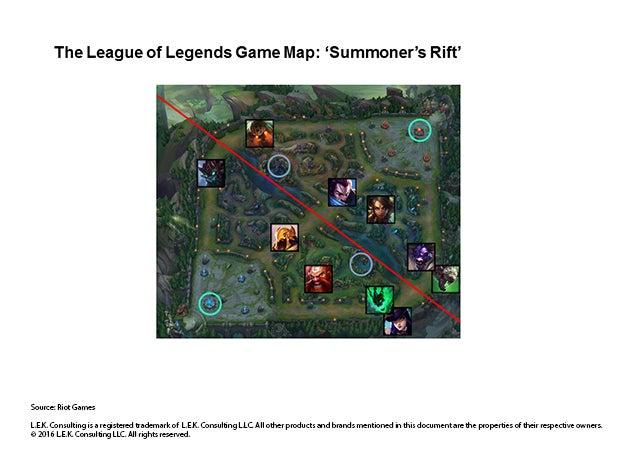 In League of Legends, two teams of five players each occupy opposing sides of a game map (think of it as a playing field, delineated by a red line on the figure). The team’s primary objective is to destroy the opposite side’s base, or nexus (circled in teal in the figure). If a team completes the secondary objectives (the baron and dragon objectives, circled in gray in the figure) it earns gold to buy items and/or momentary advantages or powers, called buffs, that make it stronger. Although the premise is simple, masterirticularly the specifics of each team member’s role — is challenging.

In first-person shooters (FPSs), such as “Counter-Strike,” teams win by “killing” members of the opposing team.

In addition to these broad categories, other genres are now getting the eSports treatment. For example, traditional fighting games, such as “Street Fighter,” as well as mobile games, such as “Vainglory” and “Clash Royale,” are popular eSports titles.

eSports is developing into a vibrant ecosystem that offers multiple game options and ways in which traditional media companies can participate. To get the most out of their marketing and advertising efforts, however, these companies must better understand their target audience.

In our next post, we will take a closer look at the fans and the outlets they use to view games.

This is Part 2 in a series on eSports by Dan Schechter, Gil Moran and Francesco Di Ianni from L.E.K. Consulting’s Media & Entertainment consulting practice.