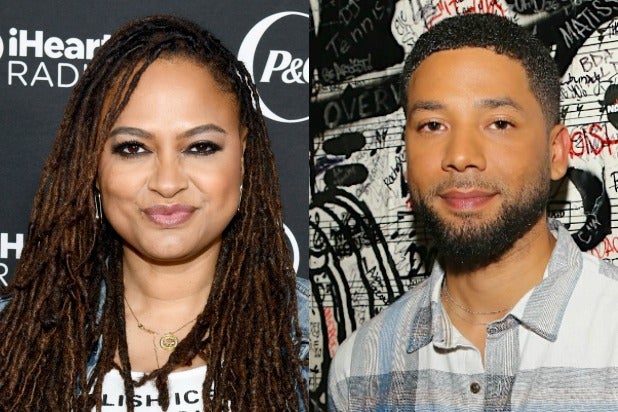 Director Ava DuVernay says she is withholding her judgment about Jussie Smollett following reports that Chicago police believe the “Empire” star paid two men to orchestrate a hate assault on him.

“Despite the inconsistencies, I can’t blindly believe Chicago PD,” DuVernay, who voiced support for Smollett after the attack, said on Twitter. “The department that covered up shooting Laquan McDonald over a dozen times? That operated an off-site torture facility? That one? I’ll wait. Whatever the outcome, this won’t stop me from believing others. It can’t.”

DuVernay is referring to the murder of 17-year-old Laquan McDonald at the hands of Chicago officer Jason Van Dyke in 2014. Initially, Chicago PD reported that McDonald was carrying a folding knife and walking erratically at the time he was shot, and ruled that the shooting was justified. But dash cam footage released a year later showed Van Dyke shooting McDonald while he was walking away, leading to the officer being charged with murder.

Also Read: Jussie Smollett's Attorneys Deny Attack Was a Hoax: 'He Has Now Been Further Victimized'

A federal civil rights investigation conducted by the Department of Justice found that Chicago PD fostered a culture of “excessive violence” against people of color and “poor supervision” of officers.

On Jan. 29, Smollett told Chicago police that he was assaulted by two men outside a Loews hotel, and that the two men called him “‘Empire’ f—t” and “‘Empire’ n—er'” while beating him, wrapping a rope around his neck, and covering him in bleach.

But this weekend, CNN reported that new evidence suggests that Smollett paid two bodybuilder brothers to orchestrate the attack. Smollett’s attorneys have denied such claims.

“As a victim of a hate crime who has cooperated with the police investigation, Jussie Smollett is angered and devastated by recent reports that the perpetrators are individuals he is familiar with,” read the statement. “He has now been further victimized by claims attributed to these alleged perpetrators that Jussie played a role in his own attack. Nothing is further from the truth and anyone claiming otherwise is lying.”