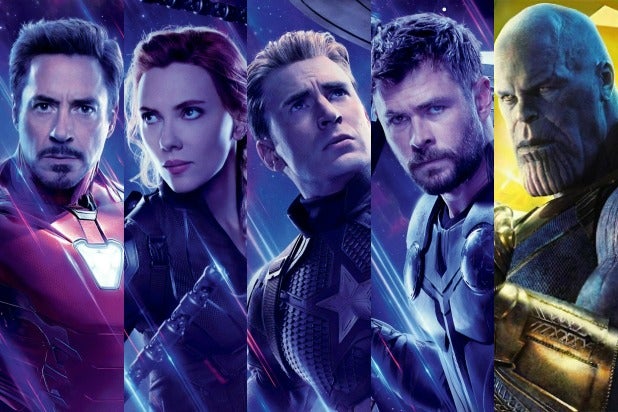 The numbers are still coming in for “Avengers: Endgame,” as its unprecedented box office success topples records left and right.

Since the Marvel Studios film first began rolling out in theaters on Wednesday, its global box office total has exploded to a mind-boggling estimate of $1.2 billion, a figure that could very well increase after Sunday’s official numbers come in. That includes a $350 million opening weekend in North America — nearly $100 million higher than the previous record set by “Avengers: Infinity War” — and a $330 million five-day opening in China.

And that’s just the biggest of the records.

So far, TheWrap has tallied 144 different box office records that “Endgame” has broken since tickets first went on sale at the start of April, including advance ticket sales, premium formats, and opening day and weekend records in countries around the world.

And keep in mind that as theaters and industry bean counters continue to crunch the numbers, even more records will be added to Marvel Studios’ trophy case over the coming days and weeks.

Here is what we’ve accounted for so far.

12 advance ticket sale records: Over the past few weeks, ticketing websites Fandango and Atom Tickets have both reported that “Endgame” has become their all-time highest pre-sellers, and record ticket sales in the first week and 24 hours of availability. AMC and Regal, the nation’s largest theater chain, announced similar new records on their internal ticketing systems, prompting thousands of new screen times to be created in theaters nationwide.

29 single day grossing records: In many of the countries where new opening weekend records were set, “Endgame” also recorded single day records in 29 markets. This includes a $109 million domestic Saturday gross, the highest one-day total ever recorded in a single market. This excludes the opening Friday totals for “Endgame” and “The Force Awakens,” which included Thursday preview totals per industry standard.

Highest global opening for IMAX and 3D formats: As only the second film in history to be shot entirely with IMAX cameras, “Endgame” got huge support from the premium format company. And it has paid off with a $91.5 million opening on IMAX screens, nearly double the previous record of $47.6 million set by “Star Wars: The Force Awakens.” That total includes $26.5 million in North America and $42.4 million in China.

Meanwhile, RealD reported that 45% of “Endgame”‘s entire global total was from 3D screenings, which comes out to a $540 million opening total. That’s 47.5% higher than the previous record of $366 million, which was set by “Infinity War.”

50 IMAX opening weekend records: While RealD has not broken down its 3D grosses by market, IMAX reports that “Endgame” has broken the company’s opening weekend records in 50 markets. These include major markets in Western Europe and Asia, as well as smaller markets like New Zealand, Taiwan, Philippines, Pakistan, Mongolia, Ecuador and South Africa. During the first week of presales in China, IMAX reports that one in four tickets sold for “Endgame” were for IMAX screenings.

Fastest to $100 million domestic and $1 billion worldwide: Industry counters announced midday Friday that “Endgame” passed the $100 million domestic mark after just 17 hours, four hours faster than “Infinity War” did. The five-day run to $1 billion worldwide also beat the previous speed record for that milestone, which “Infinity War” reached after 11 days in theaters. This was made possible by China’s simultaneous release of “Endgame” with the rest of the world, whereas that country had to wait for “Infinity War” to be released a week after all other major markets last year.

Largest Thursday preview: “Endgame” took the record for all-time highest amount ever grossed by a single film on a Thursday with a $60 million total, a record previously held by “The Force Awakens.” By the time next weekend rolls around, “Endgame” is expected to own the domestic grossing records for every day of the week.

Largest overseas opening of all-time: With China leading the way, “Endgame” has posted an estimated international opening of $859 million, topping even the global $640 million opening of “Infinity War”

Largest global opening of all-time: This figure bears repeating: a $1.2 billion global opening. After just five days in theaters, “Avengers: Endgame” already ranks No. 18 on the all-time global box office charts, and is expected to become only the fifth film to gross $2 billion worldwide. In less than a week, “Endgame” has topped the entire global theatrical runs of 17 of the 21 Marvel Cinematic Universe films that came before it, including last month’s “Captain Marvel,” which has grossed $1.1 billion worldwide.