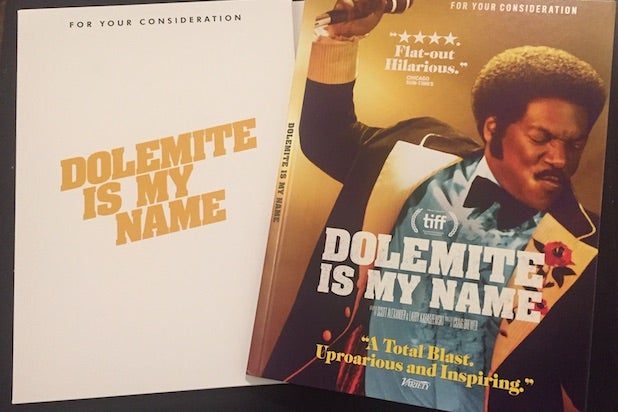 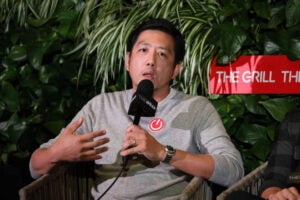 "Dolemite Is My Name" Academy and guild screeners

Awards Season Screeners Are Here, Finally – And So Are Clint Eastwood and World War I

With a week to go before Thanksgiving, the screener stream is not likely to let up

Finally, the screeners have started to arrive. After a couple of months of sporadic mailings, “for your consideration” DVDs have shown up in significant numbers in the past week, part of the annual pre-Thanksgiving push to give voters something to watch over the long weekend.

(No, streaming links have not replaced physical screeners, at least not yet.)

Just this week, the haul has included “The Two Popes,” “Rocketman,” “Dolemite Is My Name,” “Joker,” “Judy,” “Motherless Brooklyn,” “The Farewell,” “Pain and Glory” and “Midsommar,” along with a host of documentaries, a couple of screenplays, a few score and song CDs and a vinyl 45 of Thom Yorke’s song “Daily Battles” from “Motherless Brooklyn.”

Mind you, Oscar voters don’t get the same kind of swag that other voters do. (I’m a Critics’ Choice Awards voter, so some of what I get is aimed directly at that group.) Where a guild/critics screener might have photos from the film along with quotes from reviews, Oscar campaign rules say that an Academy screener must be bare-bones: packaged in “simple sleeves or boxes” with nothing more than “a film’s basic title treatment, list of ‘for your consideration’ credits and a brief, unembellished synopsis.” And, of course, absolutely none of those effusive quotes from Rolling Stone and Deadline that are so beloved of awards campaigners.

With a week to go before Thanksgiving, the screener stream is not likely to let up. 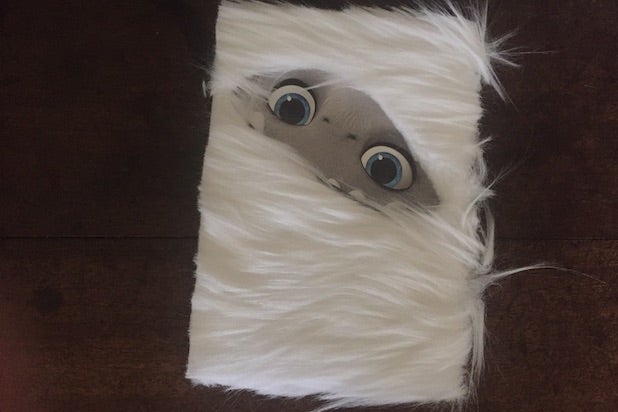 By the way, DreamWorks and Universal: I just pulled out a stack of screeners and put them next to my computer while writing that last item, and now I have a whole lot of yeti hair from your furry “Abominable” screener all over my keyboard.

I’m really not sure that was the best packaging choice. 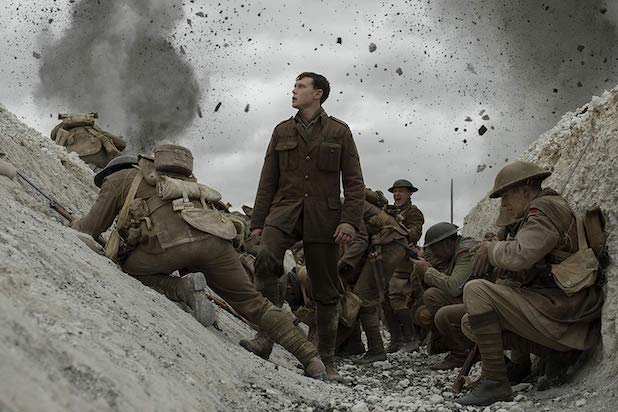 While the screeners make the job of voting easier, a couple of events that require getting out of the house will also have a big effect on awards season in the last week before Thanksgiving. Wednesday night, Clint Eastwood’s “Richard Jewell” premieres at the AFI Fest – and as with all Eastwood movies, it was only recently finished and is a big awards-season question mark.

Eastwood has unveiled his films at the last minute to great success in the past, most recently with “American Sniper” in 2014 and most successfully with the Best Picture winner “Million Dollar Baby” a decade earlier. But his last two films, “The 15:17 to Paris” and “The Mule,” have been non-starters with awards voters, so “Richard Jewell” is far from a sure thing. It also doesn’t help that the Atlanta Journal-Constitution went on the offensive on Monday, sending emails to reporters detailing what it says are blatant inaccuracies in its depiction of how the AJC covered Jewell and the Olympic bombing incident.

Universal Pictures, meanwhile, will unveil Sam Mendes’ World War I epic “1917” on Saturday in New York and with a barrage of screenings around Los Angeles on Sunday. The four Sunday screenings start at 10 a.m. in Hollywood, head west for afternoon screenings in Beverly Hills and West Los Angeles, and finish back in Hollywood in the evening – and each screening will be followed by a Q&A with Mendes, actors George MacKay and Dean-Charles Chapman, cinematographer Roger Deakins, writer Krysty Wilson-Cairns, producer Pippa Harris, production designer Dennis Gassner and composer Thomas Newman. (One hopes that there will be time for some actual questions and answers once they’ve finished introducing all the panelists.)

Sight unseen, “1917” seems as if it could be a formidable awards contender, and the verdict will no doubt be rendered on social media on Sunday. (Actual reviews will have to wait until Monday afternoon.)

TheWrap will have post-screening reports on both “Richard Jewell” and “1917.” 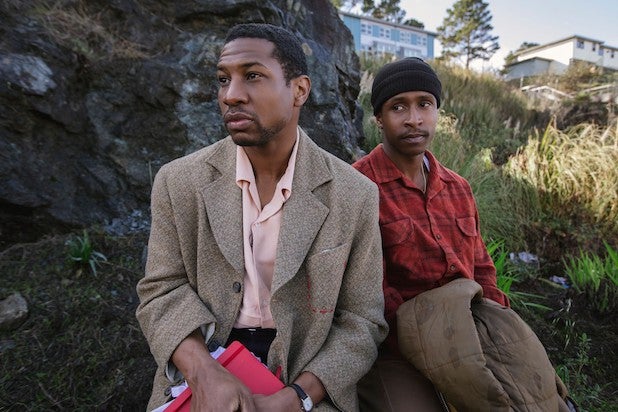 This week has already brought one batch of nominations, with the Producers Guild singling out seven documentaries for its top doc award. The news was good, of course, for “Advocate,” “American Factory,” “Apollo 11,” “The Cave,” “For Sama,” “Honeyland” and “One Child Nation,” but a little caution might be in order. In the 12-year history of the PGA’s documentary category, it has never had more than two of its nominees go on to receive Oscar nominations for Best Documentary Feature.

I suspect this year will break that streak, but it’s safe to say that the Producers Guild is not a reliable Oscar predictor in this particular category.

The week’s most significant nominations, though, will come on Thursday morning with the Film Independent Spirit Awards announcing its 2019 nominees. The West Coast-based indie film organization is expected to go with some of the same films that topped the East Coast-based Gotham Award nominations last month: “Marriage Story,” “The Farewell,” “Uncut Gems” and “The Last Black Man in San Francisco” all received three noms, though the last film was not nominated in the Best Feature category.

But “Waves,” “Booksmart,” “Clemency,” “The Lighthouse,” “Honey Boy” and even “Hustlers” could show up in a few categories, as well – and the Spirit Awards are nothing if not idiosyncratic, so don’t rule out the likes of “Give Me Liberty,” “Luce” and “The Peanut Butter Falcon.” And bet on a couple of even more obscure titles making the cut as well.

The nominations will be announced at 10 a.m. Pacific. That’s an entirely sensible hour at which to do this kind of thing, not that the Oscars or Grammys are paying attention. 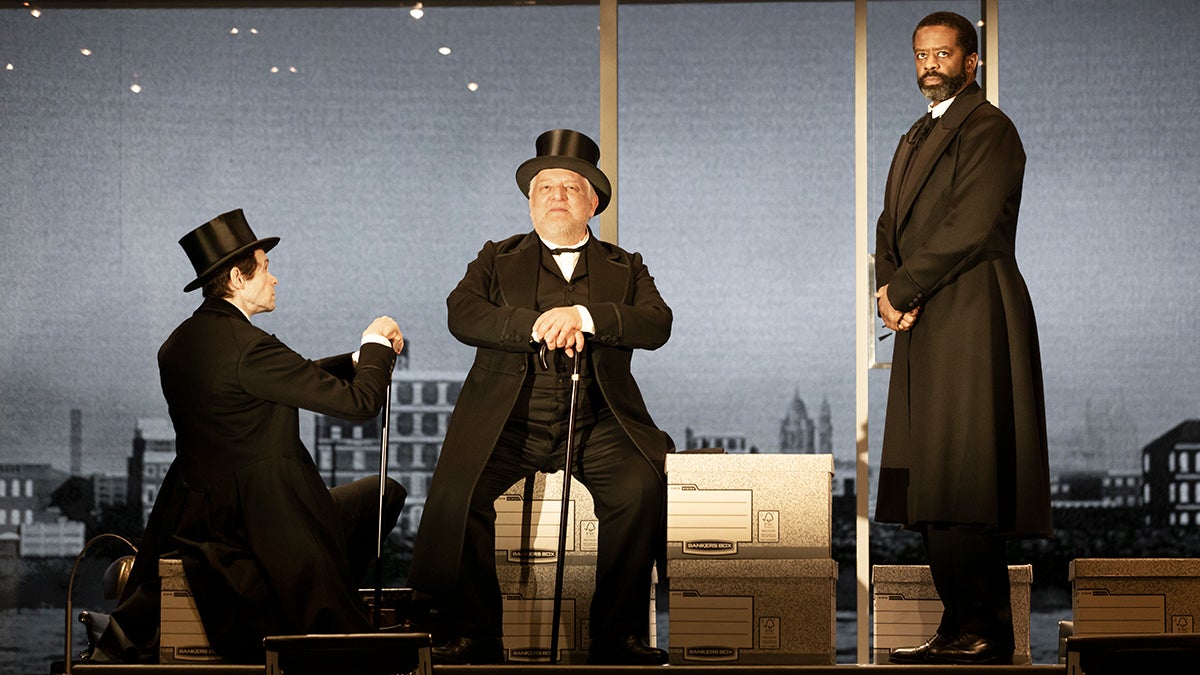