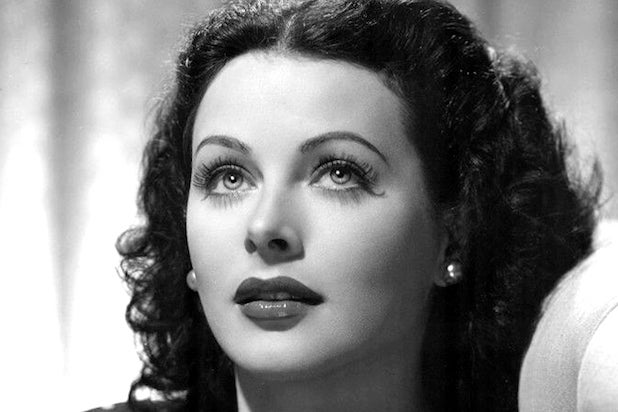 I’m dedicating a series of articles to women who contributed so much during their lives for the benefit of ours and have received very little reward or recognition for it. I call it BEHIND HIM.

I found inspiration in Judy Chicago’s The Dinner Party, an important icon of 1970s feminist art and a milestone in 20th Century art. This permanent installation at the Brooklyn Museum comprises a massive ceremonial banquet, arranged on a triangular table with a total of thirty-nine place settings, each commemorating an important woman from history. The names of another 999 women are inscribed in gold on the white tile floor below the table. Sadly, most of them are unknown to most of us. However, I believe the list could be much larger than 999. In fact, even Hedy Lamarr is not among them.

Born Hedwig Eva Maria Kiesler in the Austrian-Hungarian empire in 1914, she became a legendary Hollywood actress in the late 1930s when she was discovered in Paris by MGM head Louis B. Mayer, who gave her a new name and a new life in the U.S.

Also Read: Let Wonder Woman Come Out as Bisexual on the Big Screen, Too (Guest Blog)

A woman of incredible beauty and sex appeal, Hedy Lamarr quickly became one the most highly paid female stars of her generation. She appeared in numerous popular films, like “Algiers” (1938), “I Take this Woman” (1940), “Come Live with Me” (1941) and “Samson and Delilah” (1949). She also co-starred with such legendary actors as Spencer Tracy, Clark Gable and James Stewart.

But when she was not on set, Hedy was inventing. Yes, inventing! She worked on a tissue-box attachment to hold used tissues and created a sort of bouillon cube that, when dropped in water, made a soft drink. She also developed a new type of traffic light and a device to aid movement-impaired people in and out of bathtubs.

Her greatest invention, however, was created from the pain of watching her own country at war in Europe. Lamarr realized that radio-controlled torpedoes could easily be jammed causing the torpedo to go off course. She came up with the idea of creating a frequency-hopping signal that could not be tracked. She then teamed up with her friend, composer and pianist George Antheil, to help produce such a device. He succeeded in this by synchronizing a miniaturized player-piano mechanism with radio signals. Together they drafted designs for the frequency-hopping system which they patented.

Despite the fact that their invention was granted a patent in 1942 (filed using her married name: Hedy Kiesler Markey), the U.S. Navy never welcomed it as Hedy had expected. They declined to use the patent for reasons that are still unclear today, though misogyny had always been suspected to be the cause. In the 1950s, the military secretly began using and developing the frequency-hopping technology for other purposes without informing Lamarr. Once the Lamarr-Antheil patent expired, spread-spectrum technology — as it is called today — was used by all with no acknowledgment of its original creators.

Hedy Lamarr, who once said, “Any girl can be glamorous, all you have to do is stand still and look stupid,” no doubt joins the list of the most beautiful movie stars of all time, along with Rita Hayworth, Marilyn Monroe and Sophia Loren. But she is also on the list of women who made extraordinary scientific discoveries that went unrecognized simply because they were women, many of them having to endure male colleagues taking credit for their work. Even Marie Curie — probably the only woman scientist anyone can ever think of — was dismissed as little more than her husband’s assistant, her Nobel prizes contested by fellow scientists.

In a society governed by bigotry and generic common sense, in which it’s very hard to accept complexities and to find truth in nuances, it can still be shocking to find out that a scientific inventor can exist in the form of a beautiful woman. A recent report by the American Association of University Women, based on decades of research, concluded that bias and stereotypes still impede women’s pursuit of science from grade school through academia.

Even though I am going through life with an average brain and not a genius one like Hedy’s, all this sometimes reminds me of the disappointment in people’s eyes when they learn that I am really into physical fitness. Disappointment, yes! They are surprised to learn that I’m very fond of going to the gym and I take as much care of my muscles as I do of my books. Somehow, they can’t put the two elements together into the same box. As if caring for your own body would not be healthy for your mind. As if having some aesthetic ambition would annihilate any intellectual faculty. Theoretically, as a white male, I am at the top of the hierarchy in this misogynistic world. Theoretically, I should be spared by that judgment. Theoretically, all of us should. In fact, wouldn’t it be great to see a beautiful woman with a powerful brain, perhaps an immigrant like Hedy Lamarr, taking charge of this country?

And by the way, the principles of Hedy’s spread-spectrum technology are now incorporated into modern WiFi, Bluetooth, cordless phones, 3G cell phones, GPS systems, satellite communication networks, barcode readers, unmanned aerial vehicles, electronic automotive subsystems, and much more. In total, her invention now generates about $180 billion a year. Those are far-reaching achievements not often credited to the silver screen legend.

Italian-born Marco Calvani is an award-winning writer and director based in New York. Trained as an actor since he was a teenager, he made his debut as a playwright in 2002. Commissions from Todi Art Festival, Phoenix Theatre of London, Teatro di Roma, Th??tre de la Ville of Paris, La MaMa Theatre of New York and Grec Fundaci? of Barcelone followed. He wrote and directed plays translated and performed throughout Europe, Asia, U.S. and Latin America. He created with Neil LaBute the international project AdA %u2013 Author directing Author (Spoleto Festival, Fringe Festival Madrid, La MaMa Theatre, Biennale Venice, Grec Festival Barcelone). He is a member of the Literary Board at the National Theatre of Scotland, the Dramatists Guild of America and the Playwrights/Directors Unit at The Actors Studio. He is the winner of the 2011 S.I.A.E. Prize for Best Playwright, the 2013 Outstanding Playwright at Planet Connections Theatre Festivity Awards and the 2015 Calcante Prize. He%u2019s also the recipient of the 2015 Writer Fellowship at the Edward F. Albee Foundation. In 2016 The Actors Studio commissioned his play "The View From Up Here" directed by Estelle Parsons. Marco just wrapped the shooting of the movie version of the script, starring Melissa Leo and Leila Bekhti.