After seven years on hiatus, Big Time Rush is returning to the stage. Unfortunately, it won’t be worldwide — just in two cities.

The band made the announcement on their social media pages, confirming that all four original members — Kendall Schmidt, James Maslow, Logan Henderson and Carlos Pena Jr. — would be returning for a small tour, playing shows in Chicago and and New York.

The group found popularity on Nickelodeon in their eponymous series in 2009, toured together until March 2014 — a year after the series ended — but later went on an indefinite hiatus, as each member pursued solo careers. But as the mysterious, deep, disembodied voiceover in the announcement notes, “The world needs Big Time Rush.” 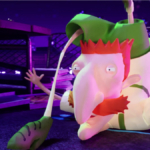 Of course, this wasn’t necessarily a surprise. Fans had an idea that something was coming, after the members of the group, along with the official band page, all changed their profile pictures and banners to a plain red layout on Monday, July 12.

Still, it seems no one was emotionally ready for it. The confirmation of live shows from Big Time Rush in 2021 sparked some…let’s say passionate reactions.

Both shows will happen in mid-December, and it’s unclear if more dates will be added.

You can check out more excitement below.