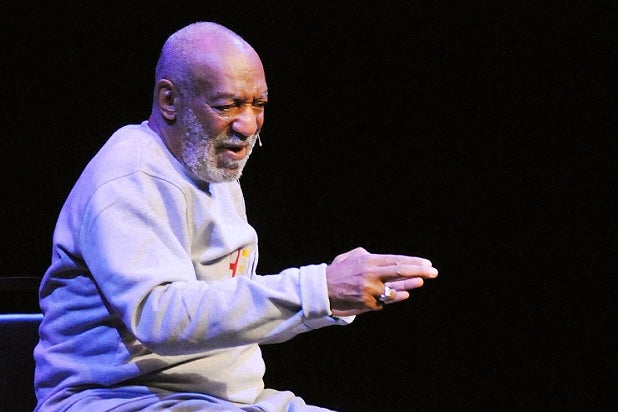 There were at least a couple of unfunny moments at Bill Cosby‘s concert at Cobb Energy Performing Arts Centre on Saturday, as the scandal-plagued comedian faced down hecklers intent on disrupting his performance.

Cosby, who’s been accused of sexual assault by dozens of women, was interrupted by at least two people during Saturday’s show, the Atlanta Journal-Constitution reports, with the comedian imploring one heckler to “Stop it!”

One attendee went on at length, in an interruption that the paper likened to “performance art,” about how he felt like “Cosby’s sweater.” (The context is unclear, though Cosby’s “The Cosby Show” character, Cliff Huxtable, was fond of fanciful sweaters.)

“Stop – do you have another 40 minutes?” Cosby shot back, to reported laughter and applause.

A second heckler, identified as Wilmington, N.C. resident Ashley Leonard, interrupted Cosby’s childhood reminiscence about his mother threatening to beat him by yelling out, “She didn’t beat out of you how you treat women!”

To which Cosby replied, “Stop it! This is our show. It will be over soon.”

Cosby’s Atlanta show was accompanied by a protest outside of the venue. Among the protestors: Attorney Gloria Allred, who represents multiple women who’ve accused the comedian of sexual assault.

In recent months, Cosby has been besieged by such accusations. Most recently, last week, two women, including an actress who had guest-starred on an episode of “The Cosby Show,” came forward with their accusations.

Since the scandal erupted, Cosby has suffered some career setbacks, including NBC shelving a sitcom that it was developing as a starring vehicle for the 77-year-old. Netflix likewise postponed a comedy special starring the comedian that was slated to run late last year.