Starz released the first trailer for its upcoming “Blindspotting” spinoff series on Wednesday.

Set six months after the events of the 2018 film, Starz’s “Blindspotting” series centers on Jasmine Cephas Jones’ Ashley, who is “nipping at the heels of a middle-class life in Oakland until Miles, her partner of 12 years and father of their son, is suddenly incarcerated, leaving her to navigate a chaotic and humorous existential crisis when she is forced to move in with Miles’ mother and half-sister.”

The film’s co-stars and co-writers Daveed Diggs and Rafael Casal are writers and executive producers on the TV adaptation, with Casal serving as showrunner and reprising his role as Ashley’s partner Miles. 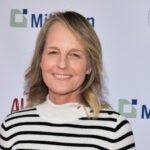 Jess Wu Calder and Keith Calder of Snoot Entertainment (“One Night in Miami,” “Anomalisa”), reunite with Casal and Diggs as executive producers on the series after the quartet spent almost a decade working to bring the feature film to life. Also serving as executive producers are Emily Gerson Saines, Ken Lee, and Tim Palen of Barnyard Projects.